The French forward may have taken a few years and a number of videos to work through the process, but Antoine Griezmann has the chance on Friday to fulfill one ambition and one bold declaration.

The first is to play for Barcelona with Griezmann set to make his full debut for Barcelona after the summer's move from Atletico Madrid in today's La Liga opener against Athletic Bilbao.

The second is to back up his wish to sit at the same table as Lionel Messi. Challenge accepted by Barca, as Messi is missing out the encounter due to injury which means that Griezmann is immediately going to be called upon to prove that he is up to the task.

The game kicks off a genuinely enthralling La Liga campaign to come. Saturday morning sees Real Madrid at Celta Vigo with Coach Zizou looking to prove that some $348 million dropped on new players including Eden Hazard - who is set to miss the opener with an injury -  will see Real Madrid with a renewed spring in its step. So far, the preseason suggests otherwise.

A very new-look Atletico Madrid gets its campaign underway on Sunday with no excuse not to challenge for the title either. An old guard has been moved aside with newer generation (and Diego Costa) taking over lead by Joao Felix who is set to be one of the most exciting talents in world football.

It's set to be a La Liga year for the ages.

It all gets underway on beINSPORTS with Athletic Bilbao against Barcelona live at 2:30PM ET / 11:30AM PT with Jeremy St. Louis, Hope Solo, Kaylyn Kyle and Thomas Rongen bringing you all the action and reaction from the game.

One footballer who is going to be missing out on all the fun this weekend is Neymar. The Brazilian remains a PSG player, but a PSG player that is currently still injured and unable to participate in the club's Ligue Un clash against Rennes - live on beIN SPORTS of course.

Le Parisien has revealed what the paper claims was the offer made to PSG in Wednesday's talks in Paris over Neymar's transfers - $66 million plus Philippe Coutinho and Arturo Vidal.

Sport says that Neymar is valued by PSG at $246 million and that any deal with Barcelona needs to reflect this figure, whether it be with cash or players. Ousmane Dembele is a footballer who might tip the balance in Barca's direction, but that would be problematic with club president, Josep Bartomeu, declaring recently that the French forward was better than Neymar.

Even Neymar is apparently chipping in on a personal level to make the move happen with the BBC reporting that Ney-Ney is willing to slum it with his salary and drop some $15 million a year down to a mere $25 million.

Preparations in full swing for #SRFCPSG! 💪

Ney-Ney is probably going to crop up as a topic for the Sports Burst live show with Gabrielle Amado and Hope Solo live on our beIN SPORTS USA Facebook page at 12PM ET / 9AM PT.

Turkey and Germany kick off as Klopp searches for a keeper

Friday also sees the return of the Turkish Super Lig.

Galatasaray begins its defence of the title at Denizlispor live on beIN SPORTS CONNECT at 1:30PM ET / 10:30AM PT.

Lyon is currently top of the Ligue Un standings with an alphabetical advantage over PSG. OL has the chance to make that lead a little more concrete with some Angers management live on beIN SPORTS CONNECT at 2:45PM ET / 11:45AM PT.

The Bundesliga is up and running on Friday as well. Bayern Munich is pluckily striding forth in a post Ribery, Robben (and James Rodriguez) world with an opening home encounter against Hertha Berlin.

Liverpool might well have a goalkeeping problem ahead of Saturday's away game at Southampton. Alisson was already sidelined. Back-up keeper Adrian is also a doubt after having his ankle accidently kicked the Spaniard's ankle during celebrations from the UEFA Super Cup win over Chelsea. "Apart from that it was a brilliant night for him," announced an ever-cheery Jurgen Klopp on Friday.

Ole Gunnar Solskjaer has closed down one transfer story in the final weeks of the window by predicting that Alexis Sanchez will "come good" for Manchester United once he returns from fitness. "He's quality," beamed the Norwegian coach.

Next Sports Burst - Is Neymar the New Bale?
Read 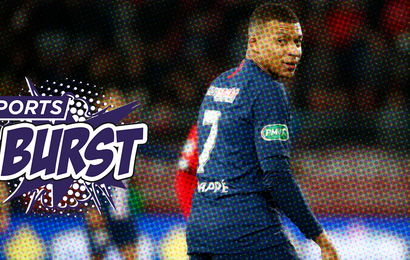