Kepa Arrizabalaga saved two spot-kicks as Chelsea squeezed into the Europa League final with a 4-3 penalty shoot-out triumph over Eintracht Frankfurt after second leg of their semi-final tie finished 1-1.

The villain of the dramatic EFL Cup final defeat to Manchester City turned hero on Thursday, denying Martin Hinteregger and Goncalo Paciencia after Cesar Azpilicueta's saved attempt left the hosts with work to do.

David Luiz and Jorginho also made amends for their misses at Wembley and it was left to Eden Hazard, featuring in perhaps his final Stamford Bridge appearance, to stroke in the winner and send Maurizio Sarri's men into a date with Arsenal in Baku on May 29.

Kepa saved it, Hazard ended it ⚡️ Chelsea is going to the Europa League final 👏🔵 pic.twitter.com/5TqsaiqARD

LUKA JOVIC 🔥
The joint-leading #UEL scorer levels it for @eintracht_us 💪

For the first time ever, the two major European club competitions will be contested by teams from the same country pic.twitter.com/DXgxQ5qF3x

Next Hazard Still Unsure Of Chelsea Future After Potent
Read 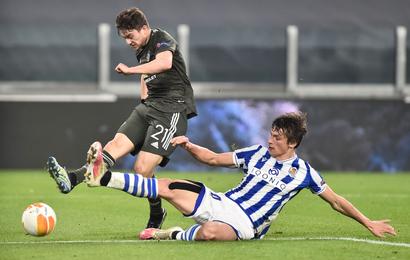