Certainly, it's not the highest of bars considering that even Gerard Pique dressed as Pep Guardiola would get a better reception from Real Madrid fans these days than Gareth Bale, but it is quite likely that a particular PSG player is going to receive the warmest receptions on Tuesday in the Bernabeu while Bale continues to suffer a frost bite of boos.

Real Madrid are taking on PSG in a Champions League, Match Day 5 clash in the Santiago Bernabeu. In footballing terms, PSG have already qualified to the next round while Real Madrid could do with a win to secure second spot and show that the team has improved considerably under Coach Zizou since the last meeting in Paris that saw a 3-0 shellacking for the Spanish side.

Rather than all things Bale for once, Kylian Mbappe was the focus of attention for Zinedine Zidane speaking ahead of the game. Once again the Frenchman did not hide his admiration for his young compatriot nor Real Madrid's desire to acquire him.

"I am already in love with him," sighed Zizou, "firstly as a person because he came to do a trial here a long time ago."

PSG manager, Thomas Tuchel, responded a few hours later joking that "unfortunately for Zidane he is our player, although I am sure he has a lot of players who he loves in his team."

Gareth Bale can certainly be scratched from that list. As can James Rodriguez. And Isco.

Keylor Navas was never on that list either but is another player who can expect a cheerier reception that a certain Welshman in a flashback to Real Madrid's past at the back, while there could be a hint of Real Madrid's future up front with Mbappe.

The Sports Burst live show will be all over this one. Just head to our beIN SPORTS USA Facebook page at 12PM ET.

Elsewhere in the Champions League on Tuesday and Jose Mourinho is going to make a home debut for Spurs fans that have had to go through rapid personality changes to embrace a figure that just a few days ago they would have reviled.

Tottenham are up against Olympiakos and Mourinho said that the match can be "the restart of empathy between the supporters and the team." And himself. 60 thousand bunches of flowers and boxes of chocolates might do the trick for Jose.

Failing that, a comfortable win for Tottenham over their Greek visitors will suffice as a win would put the EPL outfit in the next round.

Juventus and Atletico Madrid are preparing themselves for a dogged goalless draw as well on Tuesday. Cristiano Ronaldo might be part of that game after being rested for the Old Lady in Saturday's 3-1 win over Atalanta to spark suggestions that Juve are actually better without Ronaldo.

No Swede dreams for Zlatan despite Hammarby hint

King Zlatan has continued to leave a trail of breadcrumbs for those possessing a desire to know what his next, and potentially final, playing move is.

Ibrahimovic left LA Galaxy at the end of the MLS season with good wishes for fans to go back to watching baseball and soon dropped a hint that a return to LaLiga was in the offing, ten years after departing Barcelona in a huff over Leo Messi.

Bologna in Serie A seemed a possibility before Jose Mourinho's arrival at Tottenham saw rumors of the Swede heading to London for another reunion with the Special One. That was before Mourinho himself ruled out the possibility on Monday claiming that there was "no chance."

"We have one of the top two or three strikers in the world," claimed Mourinho.

That's Harry Kane, the Portuguese was referring to, in case of any confusion.

The next hint which will turn out to be both a red herring - apt considering the country it relates to - is Zlatan heading back to his native Sweden. Tuesday saw the forward using the medium of social media to post a video of an animation of a Hammarby jersey with his name on the back.

The 38-year-old has not played in Sweden since leaving Malmo in 2001.

However, there is a buzzkill element to the story. The LA Galaxy owner Philip Anschutz owns 45% of Hammarby and the club confirmed that executives are currently in Los Angeles having a bit of non-Zlatan related catch-up, suggesting that Zlatan is up to a bit of mischief in his expansive free time. 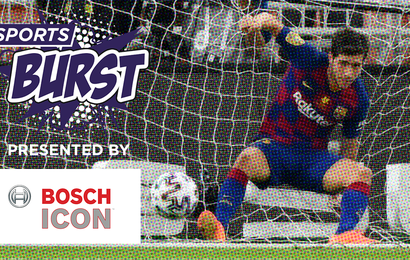