Lionel Messi made a goal-scoring return from a groin injury but it was Rafinha who stole the show in Barcelona's 4-0 LaLiga crushing of 10-man Deportivo La Coruna on Saturday. 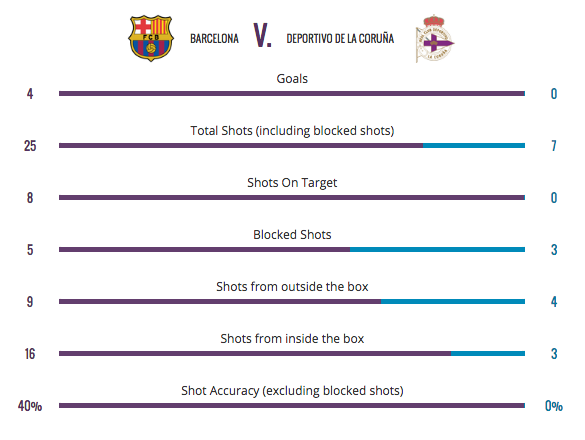 Messi showed no signs of rustiness ahead of Wednesday's Champions League clash with Manchester City as he blasted home just three minutes after coming on following a three-match lay-off, but Barca were already cruising thanks to Rafinha.

The Brazilian had been central to everything good about Barca during the early exchanges and he broke the deadlock after a clever interchange with Luis Suarez, then added his second nine minutes before the break, pouncing on a rebound and converting an easy finish.

Suarez got in on the act with a lovely effort just before his half-time withdrawal for Paco Alcacer ahead of Wednesday's crucial fixture, with Messi entering nine minutes after the Spaniard.

He made an almost-instant impact by adding the fourth and Laure's red card for elbowing Neymar just after the hour mark gave the visitors an even tougher task.

Alcacer should have scored his first Barca goal as he spurned four glorious late chances, but it had no impact on the final outcome, as the home side bounced back from the 4-3 defeat to Celta Vigo before the international break.

The fit-again Messi may have been left on the bench from the start, but Barca did not look hindered during the early stages and Rafinha, occupying the Argentinian's place in attack, crafted a fine opening just seven minutes in.

The Brazilian's left-footed cross from the right picked out Neymar at the back post and he smashed a volley on to the crossbar, before Suarez headed just over after the rebound crashed into the ground and sat up nicely for him.

After wrestling his way through three Deportivo players, Rafinha exchanged a one-two with Suarez just inside the area and then sent a low drive beyond German Lux.

Rafinha beat Lux again late in the first half, prodding home from close range after the Deportivo goalkeeper failed to keep hold of Gerard Pique's header.

And Suarez effectively wrapped things up in the 43rd minute – applying a cool finish from close range after a clever turn to beat Raul Albentosa.

Barca noticeably eased off after the break, but Messi's entrance in the 55th minute brought that to an end and a few moments later he was on the scoresheet, latching on to Neymar's exquisite reverse pass and sending an emphatic strike past the helpless Lux.

Deportivo's aim of damage limitation become even harder 25 minutes from time, as Neymar received an elbow to the face from Laure and the right-back was shown a red card.

Alcacer was desperately unlucky to not add a fifth on two occasions, heading on to the post in the 71st minute and then hammering at Lux from close range a few moments later.

The Spain international's struggles continued with another two chances, as Lux tipped a header wide and then he failed to divert Rafinha's low cross into the goal in stoppage-time, as Deportivo were somehow spared a more embarrassing scoreline.