Jorginho missed a late penalty as Italy were held to a 1-1 draw by Switzerland in Friday's eventful contest at Stadio Olimpico, leaving both sides' automatic qualifying hopes for the 2022 World Cup in the balance.

There was nothing to separate the teams at the top of Group C in terms of points accrued heading into the contest and that is how it remained after a gripping 90 minutes in Rome.

The Azzurri fell behind to a powerful Silvan Widmer drive after 11 minutes but hit back through fellow right-back Giovanni Di Lorenzo's header before half-time.

European champions Italy had a glorious chance to win the game in the 90th minute and take control at the summit, but Jorginho skied his spot-kick to set up a tense final round of fixtures.

Noah Okafor was handed a full debut for injury-hit Switzerland and played a big part in his side's early opener, the Salzburg forward leading a counter and pulling the ball back for Widmer to power past Gianluigi Donnarumma from the edge of the box.

After a spell of Switzerland domination that saw Okafor and Xherdan Shaqiri go close, Italy soon grew into the match and would have been level if not for a superb Yann Sommer save to keep out Nicolo Barella from a few yards.

But the hosts did find an equaliser before the interval thanks to a smart set-piece that was converted by Di Lorenzo, who got in front of Sommer to bravely head home – the goal allowed to stand after a VAR check ruled out offside or any sort of foul.

Italy won 3-0 when the sides met here in the Euro 2020 group stage, but their next shot after Di Lorenzo's 36th-minute leveller did not arrive until 22 minutes from time through a wayward Emerson Palmieri drive.

The hosts' chance to all but seal top spot in the group arrived two minutes from time when Ulisses Garcia was adjudged to have nudged over fellow substitute Domenico Berardi following a VAR review, but Jorginho blasted over the crossbar from 12 yards.

There was nearly time for another twist, but Andi Zeqiri failed to connect with Djibril Sow's cutback in front of a gaping goal after Donnarumma's dreadful touch gave the ball away in the box.

Regardless of the scoreline in Rome on Friday, top spot in Group C was always going to go down to the final round of fixtures. The difference now is that both teams head into their last game knowing that victory may not be enough.

Italy have a slightly better goal difference, so they only need to match Switzerland's final-game result to finish top of the pool and condemn Murat Yakin's men to the play-offs in March.

Jorginho's dramatic late penalty miss could yet prove costly, though, with the Azzurri travelling to Northern Ireland for their concluding game and Switzerland at home to Bulgaria.

The Napoli defender showed good awareness to beat Sommer to Insigne's free-kick for Italy's vital equaliser, coming at a time when the Azzurri could just as easily have been two goals down.

As well as scoring his side's first headed goal in 13 months, he also had the most touches of any player on the pitch (125) and attempted the joint-most tackles of any Italy player (three).

Since scoring his first six penalties for Italy, Jorginho has missed three in a row – one against England in the Euro 2020 final penalty shoot-out and now twice against Switzerland.

That poor spot-kick came from one of three attempts for the Chelsea midfielder, which was the most of any Italy player on the day.

There is nothing between Italy and Switzerland heading into Monday's concluding fixtures and that is also the case for their respective opponents, with Northern Ireland and Bulgaria on eight points apiece in Group C. 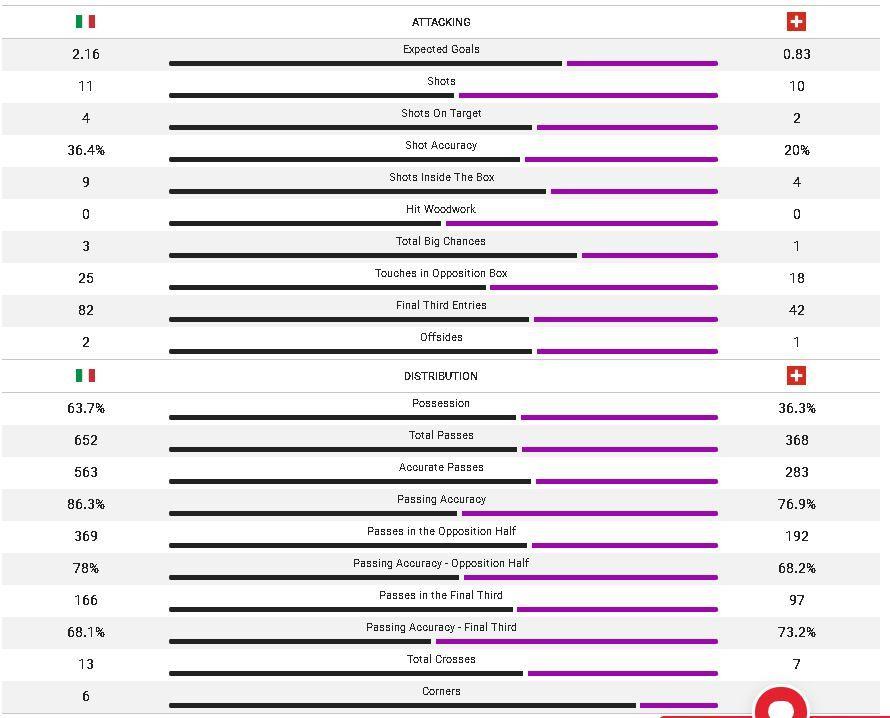 Next Muller hailed as 'incredibly important' by Flick a
Read