Alphonso Davies is back for Bayern Munich, but Julian Nagelsmann has been hit by another injury blow ahead of his belated bow with Benjamin Pavard ruled out.

Nagelsmann will get his Bayern reign under way at Borussia Monchengladbach in the Bundesliga on Friday, having seen last week's DFB-Pokal opener against Bremer postponed due to coronavirus-related quarantine measures imposed on the lower-league side.

That time has allowed left-back Davies to recover, though, making a swift return from ankle ligament damage suffered on international duty with Canada last month.

Davies played only 23 league games last season but led all Bayern defenders in recoveries (201) and boosts a back line that will now miss Pavard due to a training-ground ankle setback of his own.

"Phonzie did quite well and made a good impression," Nagelsmann said in Thursday's pre-match news conference. "It is an advantage that he is a model athlete.

"He won't be able to play the full 90 minutes yet, but I already have in mind that he will start.

"We will see how far his legs carry him. He is definitely a candidate for the first XI. We're glad he's back.

"That [injury] with Benji is very, very annoying because he played a good pre-season. He's a player I've scheduled for his position. Now he's gone for a few weeks.

"When he comes back depends on the healing process. We don't know exactly how long.

"We have players in the squad like Bouna [Sarr], Niki [Sule] or Josip [Stanisic] who can replace him."

Pavard's absence will be particularly frustrating for Nagelsmann as he has identified the defence as an area in which Bayern must improve.

While Nagelsmann's RB Leipzig boasted the best record in the Bundesliga last term (32 goals conceded), Bayern shipped 44 goals – their most since 1995-96 (46).

It ultimately did not cost the champions as they picked up 22 points from losing positions, more than any other club, but their new coach insists this approach is not sustainable.

"This is a decisive factor that we want to improve," he said. "Nobody wants to always chase after a 0-2 deficit.

"We would do well to bring in more stability defensively. Defending always has to do with attitude."

Bayern have already made a change at the back, replacing David Alaba with Dayot Upamecano, but additional transfer activity may occur further up the field.

Nagelsmann acknowledged the Bavarian giants were currently reliant on "13 or 14 players" staying healthy, and they have been linked with Leipzig midfielder Marcel Sabitzer to add further depth.

"I know Marcel very well, I've worked with him for a long time," Nagelsmann said. "He is a very good player.

"Basically, we handle this, as in recent years, that we do not comment on rumours that are floating around anywhere in the transfer market."

Next Bayern Munich Kicks Off Bundesliga Season With Dra
Read 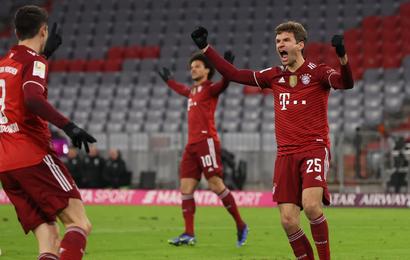