Timo Werner gave RB Leipzig a richly deserved first-leg lead in their Champions League last-16 clash with Tottenham as the Germans turned on the style in London.

The Bundesliga title-chasers spurned chance after chance, including three big opportunities in the opening 90 seconds, before Werner's penalty - his 26th goal of the season - early in the second half brought them a 1-0 victory.

Hamstrung by the absence of the injured Harry Kane and Son Heung-min, Tottenham had little bite in attack, with Lucas Moura ineffective in the central role, but they have a gem in Giovani Lo Celso who twice went close to an equaliser that would have flattered the hosts.

Tottenham's hopes of another run to the Champions League final look bleak, but Jose Mourinho must know his team could have been effectively out of this tie already ahead of the March 10 second leg in Leipzig.

Patrick Schick shot a yard wide, Angelino rattled the near post from a tight angle on the left, and Werner should have stuck away a close-range chance inside the first minute and a half of a blistering start from Leipzig.

At the other end, Peter Gulacsi had to stretch to turn away a curling shot from Steven Bergwijn that was heading for the bottom right corner.

Schick then headed no more than a foot wide from a corner as Tottenham, with their defence a nervy rabble, again came under siege. Memories came flooding back of their last encounter with German opposition at the Tottenham Hotspur Stadium, a 7-2 unpicking by Bayern Munich in October.

Werner had a glorious chance in the 35th minute after being slipped in to the left of goal, but the Germany international prodded straight at Lloris.

Leipzig finally had an opportunity they surely would not spurn in the 56th minute when Ben Davies hacked down Konrad Laimer, and this time the prolific Werner beat Lloris, his skidding penalty finding the bottom-left corner.

Tottenham almost found a swift equaliser, Gulasci clutching well to keep out Lo Celso's fizzing strike, before Schick missed an even better chance to make it 2-0 to Leipzig.

Gulasci made another fine stop to keep out a free-kick from Lo Celso, who was Tottenham's most impressive outfield player by a distance, before Lucas headed over a glaring late chance.

The Premier League side got what they deserved though. And on a night when he became the youngest ever boss to lead a team in a Champions League knockout match, at the age of 32 years and 211 days, Leipzig boss Julian Nagelsmann saw his give themselves a great change of progressing.

Spurs are just about alive in this tie, and they improved after going behind, but they were a shambles in defence for large stretches and had Leipzig's haphazard finishing to thank for staying on level terms for so long. With Kane and Son out of contention for the second leg, it is hard to see any outcome but the Germans advancing to the quarter-finals.

Lloris keeps Spurs in it

French World Cup winner Lloris might have a clanger in him, but he made some vital saves for Tottenham here. He had a stroke of luck, arguably, when Angelino's shot hit him and bounced to safety off the post, but Spurs will go to Germany with hope still thanks to their number one.

Leipzig will appreciate they should have capitalised on their first-half dominance, and it was one of those nights when their front two of Werner and Schick were always busy and giving the Tottenham defence a hard time, but without being able to find a finish in open play.

Tottenham have a big Premier League trip to Mourinho's former club Chelsea on Saturday, with the hosts fourth in the table and Spurs sitting fifth. Leipzig have their eye on the Bundesliga title and travel to face Schalke on Saturday. 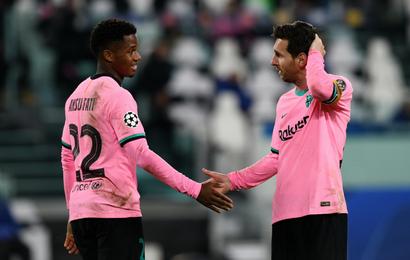