Sports Burst is so excited, and it just can't hide it, as the lighter side of beIN SPORTS looks ahead to a Tuesday that is bulging with news including some Champions League classic encounters.

The world rejoices as the Champions League returns

"Oh, what a beautiful morning. Oh, what a beautiful day. beIN SPORTS has a wonderful feeling, the Champions League is coming our way!" It's Tuesday, it's the knockout stages, a moment so exciting, that even Ben Carson looks vaguely awake, he's so thrilled by the prospect. Stand aside, Taylor Swift, top class European football is back to knock you off your perch of headlines. Today's fare sees a fascinating contest between a PSG team, unbeaten in France, but desperate to repeat their domestic dominance in Europe.

Standing in the path of King Zlatan and co are a Chelsea outfit that is the complete opposite: blooming awful at home in England, and looking at the Champions League as a way to save their bedraggled cat flap of a season. And the good people of Canada can see the clash live at 2.45 ET, so put down those curling stones and get in front of a screen.

Also in action on Tuesday are a Zenit side that looked wholly dominant in the group stages, facing a Benfica team that been plugging away in Portugal as opposed to the visitors that have not played a competitive game for two months. Not unlike Gary Neville's Valencia, really. But the Russian's excuse is a mid-season break as opposed to being completely pants.

For more big questions of the matches this week, the top read of the day in the world of beIN SPORTS is from Graham Ruthven.

Meanwhile, the English Championship keeps on keeping on. Monday's beIN SPORTS match saw second-placed Middlesbrough failing to win for the fifth time with a goalless draw against Leeds United. Two more matches steam into view on Tuesday with a corker between top of the table Hull City against the miracle seagulls of Brighton and Hove Albion.

In an annual tradition, the Spanish FA are still trying to find a location for the Copa del Rey final between Barcelona and Sevilla. The Santiago Bernabeu has been ruled out due to a Bruce Springsteen concert being held there. 'A shame' was the vibe from Luis Enrique on Tuesday, ahead of Wednesday's Sporting clash in La Liga, "we won't be able to go."

Awkward! #1 - what happens when Neymar has to borrow his lunch money for the rest of the month from 'M' and 'S' from the MSN, after hearing that a Brazilian court is issuing warrants to freeze all of the footballer's assets. "Daaaaaaaaaaaaaaad!" is the cry from the Barcelona man, over another fine mess with his finances.

Awkward! #2 - what happens when Karim Benzema meets CR7 today having admitting that Ronaldo is the greatest player of all time, whose moves he tries to copy. The Brazilian Ronaldo. Some looks over the Real Madrid water cooler, there.

Blatter faces another day of judgement

Michel Platini had his appeal against an eight-year ban from footballing activity heard by FIFA on Monday due to an iffy payment made between the two back in 2011. Now it's Sepp Blatter turning up on Tuesday for his own hearing. Both men have declared their innocence in the affair. 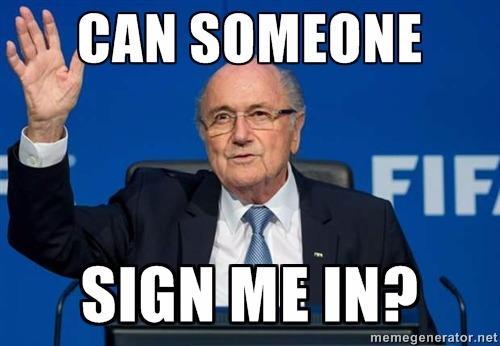 Ray of light in Argentina over the Bard of beIN SPORTS

And the fame tentacles of Ray Hudson are spreading around the planet. Argentinean sports daily 'Ole' are enamored with his Shakespearean descriptions of Leo Messi. "True nobility is exempt from fear," Too true of Ray's match calls.