The upcoming World Cup CONMEBOL qualifiers offers up a number of key questions. Is Neymar the right man to lead Brazil? Can Uruguay survive without Diego Godin at the back? Can Ecuador stay top? And will it be the end of all teeth-related gags at the expense of Luis Suarez once he sets foot on the pitch for Uruguay against Brazil on Friday, a moment that will officially end his international suspension? That was one of the posers that wasn’t put before Uruguay manager, Oscar Tabarez, who was not exactly confident in the notion that his returning striker was not going to have another gum-dinger of a game against Brazil. "We will get rid of anything that may disturb a sense of calm,” promised Tabarez on his Hannibal Lector lethal weapon in front of goal. You can find out if it will be ‘neither’ or ‘knaw’ for Luis Suarez, life on beIN SPORTS Esssssspppaaanol Ole! On Friday from 7.30PM EDT.

Kun Aguero put on his best serious face to express full confidence that the pitch in Cordoba that is set to host next week’s qualifier against Bolivia will be ready in time after being damaged by rain and an Iron Maiden concert. At least Higuain will have plenty of bobbles to point at during the clash as another shot hammers into the stands. Remember to tune into the XTRA from 10PM EDT for all the latest CONMEBOL news and the latest from the USA training camp ahead of Friday’s clash with Guatemala.

The specter of terrorism continues to have an impact on sports across Europe. Tuesday’s bombing attacks in Belgium saw the national team cancel training, with players tweeting out their shock over the events in Brussels. Belgium are due to play Portugal in a friendly in the country’s capital next Tuesday. Norwich City have issued a statement to say that their striker, Dieumerci Mbokani, was at Zaventem Airport in Brussels at the time when a bomb detonated but was unharmed, in an attack where a number of people were killed and injured.

Pray for Belgium Pray for the world ?? all my toughts are with family and friends of the victims.

Horrible to see what is going on in Brussels ??? #Zaventem

1) Horrified and revolted. Innocent people paying the price again. My thoughts are with the families of the victims. #Brussels

These attacks occurred after Sunday’s Istanbul derby between Galatasaray and Fenerbahce was called off just 65 minutes before kick-off due to security concerns following a bombing in a busy shopping street in the city center, the previous day. Meanwhile France manager, Didier Deschamps, has said that his team must “move forward” as it makes its return to the Stade de France for the first time since the stadium was targeted during a clash with Germany during November’s bomb attacks in Paris. France are set to play Russia in the venue next Tuesday.

One of the mysteries of the week has been solved. Who was the mysterious figure in the crowd at the Villarreal v Barcelona game who came off the worst after being struck by a wayward shot from Leo Messi? That woman goes by the name of Raquel and happens to be a big Real Madrid and Cristiano Ronaldo supporter, but unfortunately had her wrist broken in one of the great moments of sporting karma. She has been invited to catch at Barcelona game at the Camp Nou. Possibly the upcoming defeat for her team in the Clasico as a double whammy.

Perhaps to deliberately annoy Cristiano Ronaldo and destabilize Florentino Perez, his sworn enemy, former Real Madrid president, Ramon Calderon, has said that Gareth Bale should be given an extra two years to his current deal which still has three years to run and should be given a pay rise to boot. Bale has scored 15 league goals in 18 games this season.

In one of the least surprising news stories of Tuesday – and one of the most welcome – Raymond Moore has resigned from his role as the BNP Paribas Open chief executive and tournament director, after Sunday’s comments that women tennis players should “go down every night on (their) knees and thank God that Roger Federer and Rafa Nadal were born, because they have carried this sport.” Many of those lucky ladies are gathering with the men, and almost certainly some awkward moments, with the Miami Open getting underway on Tuesday, an event featuring Serena Williams spreading rose petals onto the path of Novak Djokovic and Roger Federer. 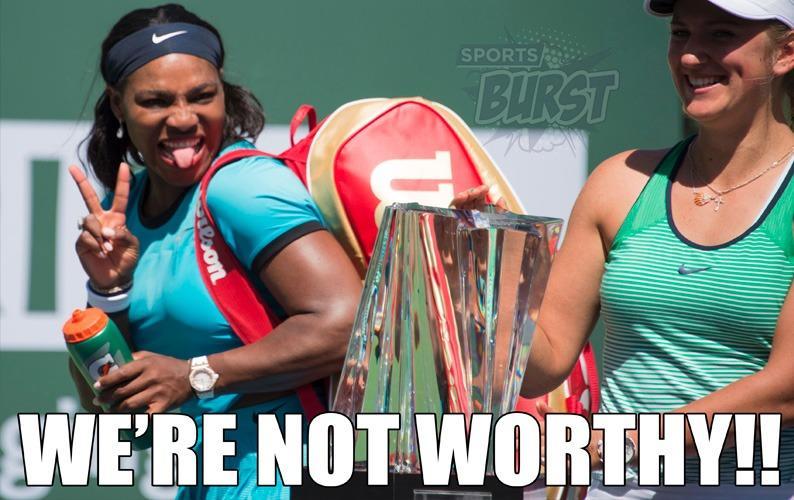 Usain Bolt has confirmed that the 2016 Rio Olympics will be his last, with the Jamaican planning his retirement after the 2017 World Championships in London. Bolt says that his last goal is to run a sub-19 second 200 meters, after setting the current world record time of 19.19 in 2009. Remember that you can catch Usain Bolt and the other global stars of the track and field in the Diamond League, ahead of the Olympics, exclusively on beIN SPORTS.

The former caddy of Tiger Woods, Steve Williams, has said that he does not expect to see the former world number one winning another major and suggests that some of the golfer’s current back problems might be self-inflicted from too much gym work. Woods is currently 467 in the world rankings.

In one of the remarkable stories of the weekend, F1 driver Fernando Alonso, to race in Bahrein in under a fortnight after being given the once-over after a horror-crash at the season-opening Australian Grand Prix on Sunday. Alonso admitted that his body felt as if he had been through a washing machine cycle.

Next Life’s a Pitch for Leo Messi
Read