The Portuguese was absent from the dugout following his dismissal in Sunday's 1-1 draw against the same opponents, having kicked a drinks bottle in frustration when Paul Pogba was booked for diving. 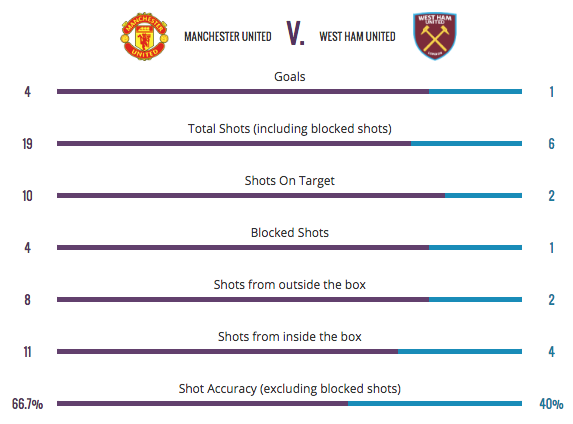 United were behind inside two minutes in that game, but the roles were reversed this time as Zlatan Ibrahimovic swiftly put the hosts ahead.

It was a lead they should have built on, with Ibrahimovic again coming close before Wayne Rooney tested Adrian with a curling free-kick.

West Ham made Mourinho's side pay for their profligacy when former United youngster Ashley Fletcher pounced on a mistake from David De Gea to prod in the leveller, opening his account for the club.

Carrick: "We feel like we've played like that for a number of weeks. We've been creating chances but things haven't been going for us."

But when the visitors were slow to get going again in the second half, Martial's emphatic finish and a 62nd-minute tap-in from the France forward set United on course for a possible Wembley return, having won the FA Cup there last season. Ibrahimovic added United's fourth in the 93rd minute, Bastian Schweinsteiger involved in the build-up on what was his first appearance of the season as a late substitute.

Pogba's weekend booking was his fifth of the season, an unwanted feat matched by Marouane Fellaini meaning the pair were forced to miss out, as was Sunday's West Ham goalscorer Diafra Sakho (hamstring).

The home side were quick out of the blocks and forged ahead when Rooney's pass found Henrikh Mkhitaryan and his neat back heel picked out Ibrahimovic to lift over Adrian, who escaped punishment after digging his studs into the Swede.

It ought to have been 2-0 just five minutes later, but Adrian denied Ibrahimovic after the visiting defence had parted and Martial failed to get a shot away from the rebound.

Slaven Bilic's side were opened up again on the half-hour mark and, after Ibrahimovic had selfishly opted to shoot when Mkhitaryan was well placed, the loose ball was worked to Martial, whose attempt with the outside of the boot was smothered by the goalkeeper.

Having failed to fully capitalise on their dominant start, United were pegged back 10 minutes before the break when De Gea fumbled Dimitri Payet's tame strike and Fletcher was on hand to turn home on the follow-up.

Just as in the first half, the hosts kicked off the second with clear intent and regained the lead three minutes after the restart. Antonio Valencia's clever flick freed the impressive Mkhitaryan inside the box, with the Armenian's cutback blasted in by Martial.

A skidding Ibrahimovic free-kick was tricky for Adrian, who saved on that occasion but was soon beaten by Martial's tap-in from Valencia's pass across goal as the Red Devils finally took control.

West Ham never threatened a comeback and, while United - who added gloss via Ibrahimovic's late close-range finish - now have perhaps a welcome distraction from their modest Premier League form, Bilic's men return to top-flight action on Saturday against fellow quarter-final losers Arsenal with only a one-point gap to the bottom three.three.

Ligue 1 Round 11: Best of American Players