Chile have the chance to claim back-to-back Copa America titles after sealing their passage to the decider of the Centenario tournament with a 2-0 win over a 10-man Colombia.

Jose Fuenzalida may not score an easier goal in his career than this. #COLvCHI #MyCopaColors https://t.co/E83H13IOIU

The defending champions raced out into a 2-0 lead after 11 minutes in Chicago courtesy of early goals from Charles Aranguiz and Jose Fuenzalida.

.@Argentina and @LaRoja will play for the 27th time at #CopaAmerica. Chile has never won in regular time. #Copa100 pic.twitter.com/A88FEv4nfb

Colombia winger Juan Cuadrado headed a cross down to Aranguiz, who had the simple task of slotting it past David Ospina, before Fuenzalida tapped home from close range after an Alexis Sanchez shot came off the post.

However, as a severe storm made its way to Soldier Field, the second half of the contest was delayed for over two hours due to the threat of lightning. 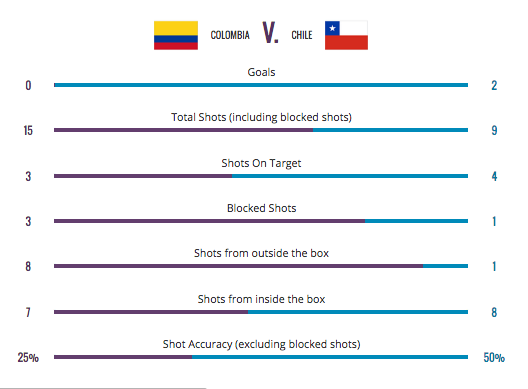 The skies finally cleared and action resumed at almost 22:30 local time (03:30 GMT), but wet patches all over the pitch made things difficult for the players.

Colombia worked hard to reduce the deficit but were dealt a huge blow when Carlos Sanchez received a second yellow card in the 57th minute.

Chile held on to the win to seal their spot in the final against Argentina - a rematch of the 2015 decider in which the former came out winners after a penalty shoot-out.

Juan Antonio Pizzi was forced into two changes from Chile's big win over Mexico in the quarter-finals, with the suspended Arturo Vidal and injured Marcelo Diaz replaced by Pablo Hernandez and Francisco Silva in the midfield.

Former Spain international Pizzi also decided to bring in Mauricio Isla, with Fuenzalida pushed forward in place of Edson Puch, who missed out on a starting berth despite scoring twice against Mexico.

Colombia coach Jose Pekerman made two changes to his line-up, with the injured Carlos Bacca and Farid Diaz replaced by Roger Martinez and Frank Fabra.

Charles Aranguiz takes advantage of a defensive miscue to get Chile off to a dream start. #COLvCHI #MyCopaColors https://t.co/eFawHVd0Kj

Chile started the brighter of the two sides and, like against Mexico, took an early lead when Cuadrado headed a Fuenzalida cross towards goal and right into the path of Aranguiz, who slotted the ball past a helpless Ospina.

The defending champions were rampant in the opening stages with their trademark forward pressure and they doubled their advantage just four minutes later.

Chile goalkeeper Claudio Bravo's long ball forward to Sanchez gave the Arsenal attacker - making his 100th appearance for Chile - the chance to turn his man and shoot, with Fuenzalida tapping home the rebound after the blistering strike came off the post.

Sanchez had another chance on goal in the 15th minute following some neat footwork in the box, but his shot from a tight angle came off Ospina and the upright.

Colombia needed to respond quickly and almost did so nine minutes later when James Rodriguez played in Roger Martinez, but the 21-year-old had his shot expertly saved by Bravo.

Bravo came up big again to deny Santiago Arias shortly after, before producing another stunning save to keep Chile ahead going into the half-time break.

Play resumed two hours later due to inclement weather, but both sides appeared sluggish due to the break and the far from ideal pitch conditions.

Bravo carried his first-half form into the second period and continued to make some crucial saves, including one from distance from James.

Colombia's task was made even harder when Sanchez was sent off for a second bookable offence 12 minutes into the second half after a foul on Aranguiz.

Pekerman's side showed little late in the game, with Chile holding on to book a meeting with Argentina in the final of the special-edition tournament.

Football Will Never Be The Same – Messi