Marek Hamsik produced a superb performance to inspire Slovakia to a 2-1 Euro 2016 win over Russia.

The Napoli star scored one and set up another for Vladimir Weiss at Stade Pierre-Mauroy in Lille, to give his country their maiden European Championship victory following a 2-1 loss to Wales in their Group B opener.

Hamsik found the net with a stunning strike on the stroke of half-time to give Slovakia a 2-0 lead, 23 minutes after playing provider for Weiss.

Weiss had took advantage of an outstanding long ball from Hamsik, beating a pair of Russia defenders and thumping Slovakia into the lead.

Denis Glushakov got one back for Russia with 10 minutes to go with a well-placed header but they were unable to complete the comeback despite a heavy spell of late pressure.

The defeat inflicted further Euro 2016 pain on Russia, who were handed a suspended disqualification and a £119,000 fine by UEFA for crowd trouble against England during last Saturday's 1-1 draw.

Jan Kozak's Slovakia will now look to make sure of their place in the last 16 against England while Russia's progression hangs in the balance ahead of the group-stage finale with Wales.

Slovakia were the better team in an uneventful first 20 minutes, but long range efforts from Hamsik and Jan Durica failed to test goalkeeper Igor Akinfeev.

Russia striker Artem Dzyuba had the first real chance of the game but could not generate enough power on his header after good work down the right from Igor Smolnikov.

Dzyuba then turned provider for Fyodor Smolov after 27 minutes, but his fierce strike brushed the post and went wide. 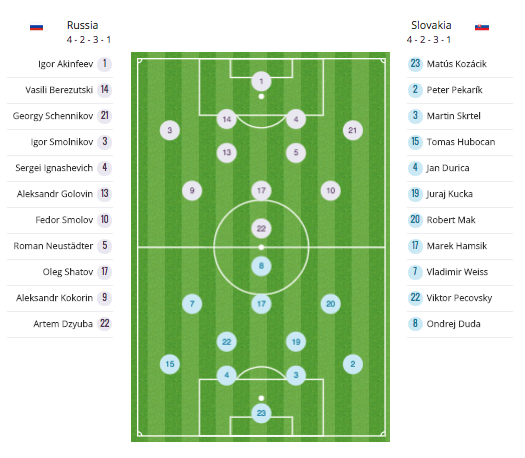 Russia were soon made to pay for their profligacy when Hamsik played a wonderful searching pass to former Manchester City forward Weiss, who cut back inside and buried his shot in the bottom corner.

The impressive Hamsik doubled Slovakia's advantage in superb style on stroke of half time with a curling effort that cannoned in off the inside of the Akinfeev's post.

Russia rallied in the early exchanges of the second half but lacked cutting edge in the final third.

Oleg Shatov was given space to shoot by the Slovakia defence but hit a sailing effort over the bar and Aleksandr Kokorin's blocked strike trickled into the arms of Matus Kozacik.

Slovakia's Durica then put in a brilliant block to deny Russia a way back into the game courtesy of a Smolov volley.

Glushakov's header gave Russia hope and the midfielder had a chance to equalise in the final minutes, only to see his volley go agonisingly wide.

Next Cristiano Ronaldo Comments Show Why He Is One Step
Read