David Silva and Diego Costa struck as Spain held on to win 2-1 away at Macedonia and remain top of World Cup qualifying Group G.

In-form Silva scored for the fourth consecutive Spain match as Julen Lopetegui's men made a fast start in Skopje.

Chelsea striker Costa, who has been heavily linked with moves to AC Milan or the Chinese Super League, then netted his fifth goal of the campaign before the break. 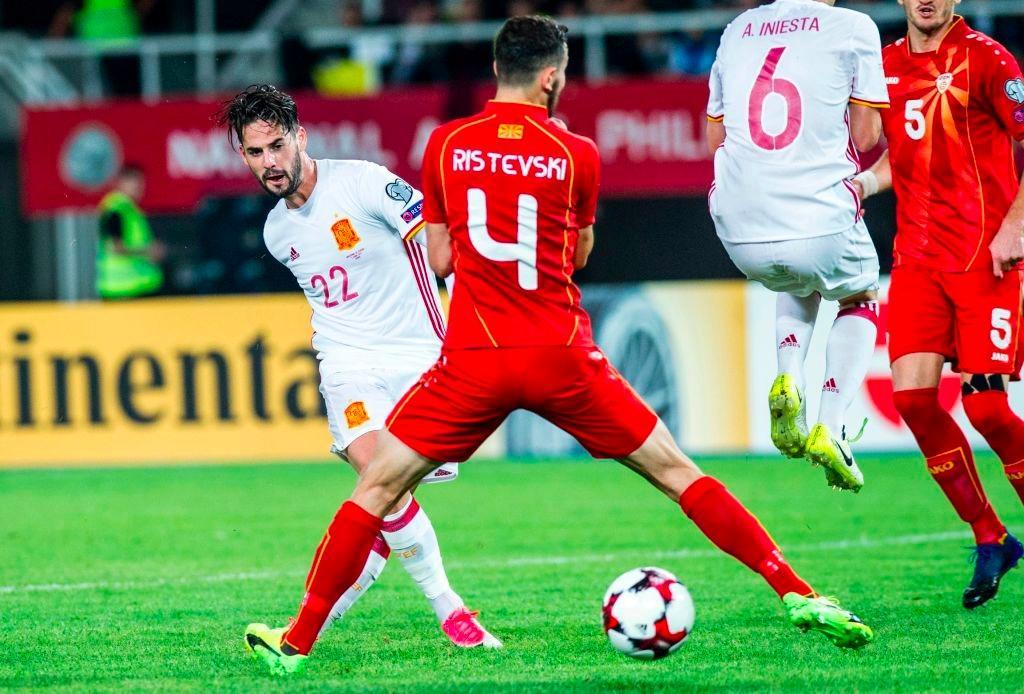 Stefan Ristovski scored his first international goal in spectacular style as Macedonia threatened a second-half fightback, but Spain held on to stay ahead of Italy, who beat Liechtenstein, on goal difference.

Spain, who are still unbeaten under Lopetegui, now turn their attention to September's potentially decisive match against Italy in Madrid, with only one automatic place for next year's tournament in Russia available.

La Roja moved in front after 15 minutes, Silva striking with a goal that was made in Barcelona.

Andres Iniesta chipped impressively into the path of onrushing Barca team-mate Jordi Alba and his cutback found Silva, whose neat turn allowed him to produce a right-footed finish that had just enough pace to beat goalkeeper Stole Dimitrievski from eight yards.

Real Madrid star Isco had a curling effort saved by Dimitrievski, before he turned creator for Spain's second after 27 minutes.

Isco showed dazzling footwork to beat defender Kire Ristevski down the right and his square pass laid it on a plate for Costa to score from three yards.

Ristovski arrowed an effort wide as Macedonia threatened for the first time, but Isco was a constant threat at the other end as he sought a goal for himself.

The attacking midfielder was denied by Dimitrievski twice more and also fired another effort inches wide as the visitors went into half-time with a two-goal advantage.

Spain should have made it three after the break, but Gerard Pique headed over Iniesta's cross from six yards after beating the Macedonia offside trap.

The hosts found a way back into the game with 66 minutes gone, striking with their first shot on target.

Ristovski raced on to a clever flick from Goran Pandev on the halfway line, before completely outpacing Sergio Ramos and unleashing a superb strike past David de Gea into the roof of the net before Dani Carvajal could get across.

But Macedonia were not able to trouble De Gea again, Pique heading wide and Costa forcing a save from Dimitrievski as Spain had to settle for a narrow victory that keeps them in pole position.

Scaloni: Messi thriving with us now

Dest shines in victory for a young USMNT

Cuadrado: "Game vs. Ecuador will be like a final"

Portugal: "One final down, two to go"