Lyon defender Mapou Yanga-Mbiwa says he will miss being able to fight against Zlatan Ibrahimovic in Ligue 1 this season.

The 34-year-old joined Manchester United after his contract at Paris Saint-Germain expired at the end of last term and he has scored twice in his first two competitive matches for Jose Mourinho's side.

Ibrahimovic claimed 12 trophies during his time with PSG, including domestic quadruples of Ligue 1, Coupe de France, Coupe de la Ligue and Trophee des Champions titles in each of his last two campaigns in France.

And Yanga-Mbiwa admits that his departure could harm Ligue 1's reputation abroad, while he will miss the personal battles they enjoyed following his move to Lyon from Roma last August.

"I'll miss him and the league will miss him, because his presence made people abroad talk about the championship," he told Foot Mercato.

"But he's gone, it's too bad. I'll have to find another person who I can fight on the pitch.

"I'm kidding – but he's a really great player who left his mark on France."

An Icardi late goal gives PSG the win vs. Lyon 😰

Mbappé and Icardi give the win to PSG

Neymar equalizes with a penalty

Paquetá scores the 0-1 against PSG!

Take a look at this backheel: Neymar to Messi 👀

"This is vintage Messi" - PSG attack against Lyon 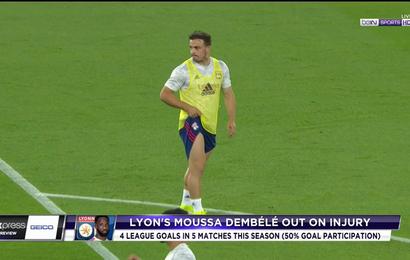 Lyon with Shaqiri and without Dembele against PSG