Barcelona will seek to exorcise the demons of Saturday's "painful" home defeat by overcoming Manchester City in the UEFA Champions League.

Luis Enrique's side were lacklustre in a 1-0 La Liga loss to Malaga, which handed the initiative firmly to rivals Real Madrid in the domestic title race.

But the Catalan club still harbour hopes of completing a treble this season, with European aspirations taking centre stage on Tuesday as Barca head to the home of the English champions.

And assuaging the hurt of the weekend's setback is top of coach Luis Enrique's priorities.

"Defeats are painful whenever they occur and are difficult to overcome, but we have a great challenge [against Manchester City]," he said.

"I hope this [performance against Malaga] was an accident, but we will see in the coming weeks."

The result ended a run of 11 consecutive victories for Barca, who are on the brink of reaching the Copa del Rey final after their 3-1 first-leg triumph over Villarreal.

Barca overcame City at the same stage of last season's Champions League, a 4-1 aggregate success set up by a 2-0 win at the Etihad Stadium, with Manuel Pellegrini's side having a man sent off in both fixtures.

The hosts head into the match having rediscovered their form and scoring touch, with the last two Premier League games yielding six points and nine goals.

With his side's title chances having received a boost, Pellegrini's focus will now fall on helping City reach the quarter-finals for the first time. 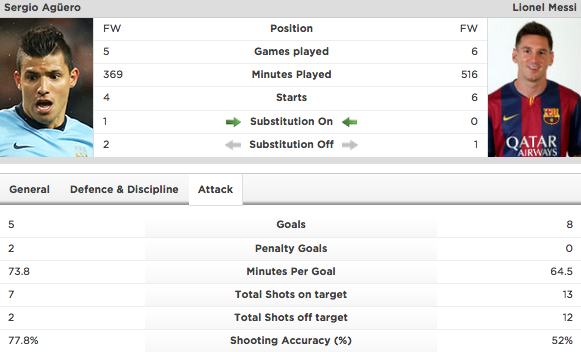 The Chilean may have to make do without James Milner, who missed the Newcastle match with a knee injury, while Yaya Toure will not be able to face his former club as he concludes a suspension following his dismissal against CSKA Moscow.

A 21-man Barca squad will make the trip to Manchester, with the one cause for concern being defender Jordi Alba, who trained alone on Sunday following a knock.

One man among the visiting contingent who may have more to prove than the rest is Dani Alves, whose failure to deal with a straightforward long ball allowed Juanmi to net Malaga's winner at Camp Nou.

The Brazilian will have fond memories of facing City, though, having netted in both legs last season.

The return leg will take place in Barcelona on March 18 - just four days before El Clasico.