A Gonzalo Higuain brace and a masterful display from Lionel Messi - who created some more history with a goal of his own - helped Argentina into the Copa America Centenario semi-finals after a 4-1 win over Venezuela.

Messi equalled Gabriel Batistuta's 54-goal record for Argentina, joining the Fiorentina great as their country's equal top goalscorers when he turned home the third goal to seal his side's triumph. 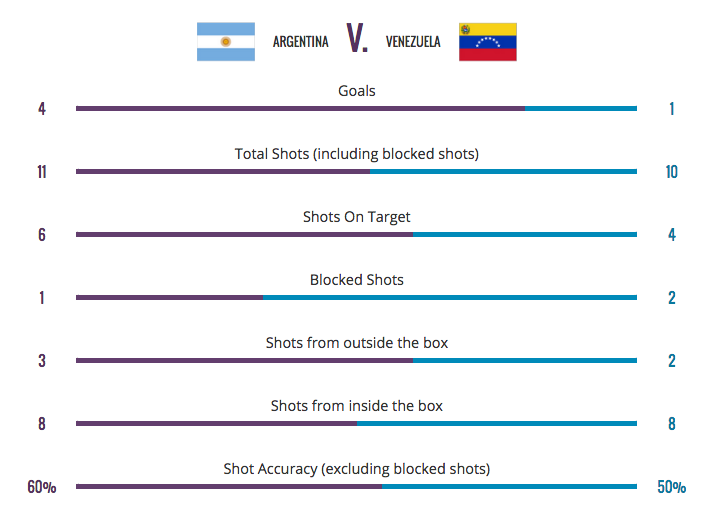 His goal followed a first-half brace from Higuain, who looked in inspired form, scoring his 27th and 28th goals for his nation, with Tottenham's Erik Lamela also getting in on the goalscoring with his first touch of the ball after coming on just four minutes earlier.

Messi - who finished with a goal and two assists - was making his first start of the tournament, lining up in a frightening front three alongside Higuain and Nicolas Gaitan, with Angel Di Maria sitting out through injury.

Venezuela coach Rafael Dudamel restored his first-choice team after giving some of the bigger names a break in their final group match, a draw against Mexico, with Salomon Rondon and Josef Martinez given the chance to continue their impressive partnership up top, with the former scoring his team's consolation.

Luis Seijas missed a first-half penalty for Venezuela when they were trailing 2-0 and that proved to be costly.

Messi was always going to be the star of the show and if Higuain took the goalscoring glory, it was the Barcelona star that was playing the role of conductor.

With his magical left foot, Messi spent much of the game's opening seven minutes bamboozling the Venezuelan defenders, who could only do just enough to crowd out the magician from getting direct shots on goal.

Having been denied twice, Messi took a more direct approach in the eighth minute.

The Barca marvel picked up the ball on the right wing, and having spent the previous seven minutes leaving defenders in his wake, he launched the ball into the Venezuela box, finding Higuain with a gorgeous pass, which the Napoli star could only oblige to put away with a sublime finish.

Messi was then denied what looked a clear penalty after 21 minutes, before Higuain eventually made it 2-0.

It was his 28th goal for his country, and he may never score an easier one after he pounced on a terrible back pass, rounded Daniel Hernandez and calmly put the ball into the back of the net to double Argentina's lead.

It was the worst possible start for Venezuela, but they fought back admirably in a chaotic finish to the first half.

Sergio Romero and the post denied Rondon before the goalkeeper almost went from hero to villain.

He gave away a penalty by taking out Martinez in the box leaving the referee with no choice, but they could not make the most of the golden opportunity presented to them, as Seijas attempted a panenka which Romero read to make an easy save.

Messi needed less than 15 minutes in the second half to score his record-equalling goal, combining beautifully with Gaitan before placing through Hernandez's legs.

Rondon gave his side some hope of a remarkable comeback when he registered a deserved goal in the 70th minute, but Lamela ended it less than a minute later when he turned home a lovely Messi pass to seal the result.

2021 Copa America's Team Of The Tournament

Messi: I Needed To Achieve This