Tottenham's 2-2 draw with Chelsea on Monday ensured Claudio Ranieri's side would be crowned champions, and they ended a week of partying across the city with another exemplary performance in front of a jubilant crowd at the King Power Stadium.

Having been serenaded before kick-off by opera star Andrea Bocelli, who sang Nessun Dorma and Por Ti Volare while sporting a personalised Leicester shirt, the home fans were sent into raptures when Vardy - back from suspension - opened the scoring after just five minutes from Andy King's cross.

And King, who has been with the club throughout their rise through the divisions, capped a memorable day when he swept in the second after good work by Riyad Mahrez. 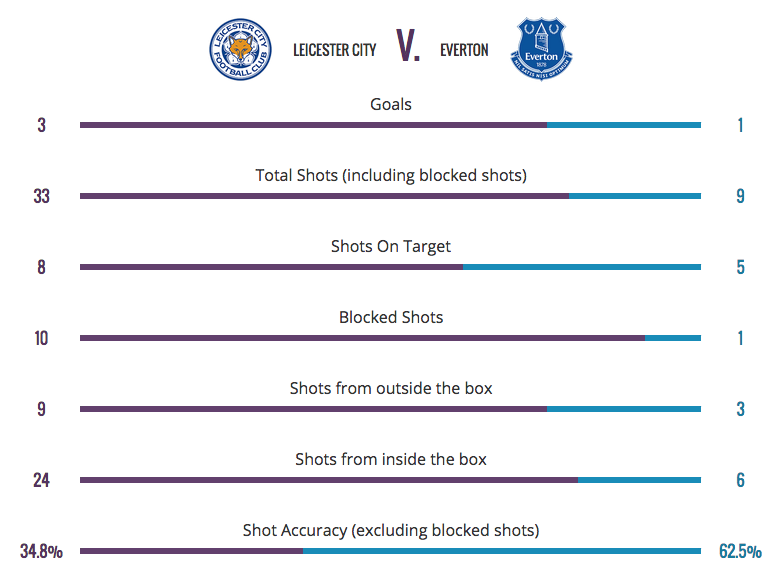 Everton enjoyed plenty of possession but could only muster two half-chances for Romelu Lukaku before Leicester bagged their third, with Vardy firing home from the penalty spot after being fouled by Matthew Pennington.

Vardy missed a second penalty but the mood inside a sodden King Power could not be dampened - even by Kevin Mirallas' late consolation - as Ranieri's team were crowned with three more points and the Premier League trophy in their final home match of an unforgettable season.

Andy King's goal was good, but his celebration was better #LCFCChampions https://t.co/jPhLaFYCEw

The noise inside the King Power hit deafening levels as Everton gave the champions a guard of honour on their entrance from the tunnel, and the home fans were on their feet again soon after as Vardy marked his return in style.

King, starting in place of the suspended Danny Drinkwater, curled a cross in from the right and Vardy raced in behind the static John Stones to divert the ball beyond Joel Robles and into the far corner.

Leicester were comfortably in control against an Everton side without a win in their last four away games and could have doubled their lead when King headed into Joel's hands from close range after a fine Mahrez cross, before Christian Fuchs just failed to connect with Marc Albrighton's pass on the edge of the area.

Everton struggled to fashion any clear sights of goal despite bossing possession and they found themselves 2-0 down before the break. Mahrez skipped into the area and Leighton Baines' challenge only diverted the ball into the path of King, who swept the ball low past Joel.

Oumar Niasse - who barely had a sight of the ball in the first half - saw an attempted chip headed away by Kasper Schmeichel just outside the Leicester area, before the Danish goalkeeper made a good low stop to deny Lukaku's close-range back-heel.

But Leicester did not have to wait long for their third. Youngster Pennington - perhaps fortunate to escape a red card for bringing down Mahrez in the first half - clumsily tripped Vardy in the area, and the England striker drilled in low from the spot for his 24th league goal of the season.

Vardy then spurned the chance for a hat-trick by wildly blazing a second spot-kick over the bar after Wes Morgan was felled by Darron Gibson.

And the visitors grabbed a consolation through substitute Mirallas, who turned past the challenge of Marcin Wasilewski before slotting beneath Schmeichel, but the goal did nothing to spoil Leicester's party.