OMNISPORT
There's no question about it, how Ricardo "Tuca" Ferretti chooses to deploy his troops Saturday will determine whether his stint as interim manager was a success or failure.

The temporary boss has plenty of options when Mexico takes on the United States on Saturday night, though his choices have been somewhat depleted thanks to injury to defensive midfielder Jose Juan "Gallito" Vazquez and attacker Giovani dos Santos.

Fitness will likely play a large role in what Ferretti does. If Rafa Marquez is fully recovered from an adductor problem that kept him out several weeks at Hellas Verona, then he can play as the center of a three-man center back core as he did in September's friendly draw with Argentina. That would let Mexico play a 5-3-2 formation, one it had become accustomed to before Miguel Herrera was fired for an off-field incident after the Gold Cup.

That would see Marquez in the middle with center backs Hector Moreno and Diego Reyes to his side, Paul Aguilar at right wing back, Miguel Layun on the left. In the three-man midfield, Hector Herrera, Jonathan dos Santos and Andres Guardado could reprise their Gold Cup-winning roles with Javier "Chicharito" Hernandez and another forward, either Raul Jimenez, Carlos Vela or Oribe Peralta up top.

If Marquez is not good to go, it probably makes more sense to play a flat 4-4-2 rather than try to put another center back in the mix. Ferretti could go with something like this: The problem, though, is that with Gallito out, there's no obvious replacement next to Dos Santos. Vazquez put in a strong showing against Argentina, in contrast to what Club America youngster Javier Guemez showed in the previous friendly against Trinidad and Tobago. Guemez is promising, but that match and the Copa America indicate he has a bit to learn before he's tossed into the fire.

Does Ferretti have any choice? Let's take a look at a few other options... 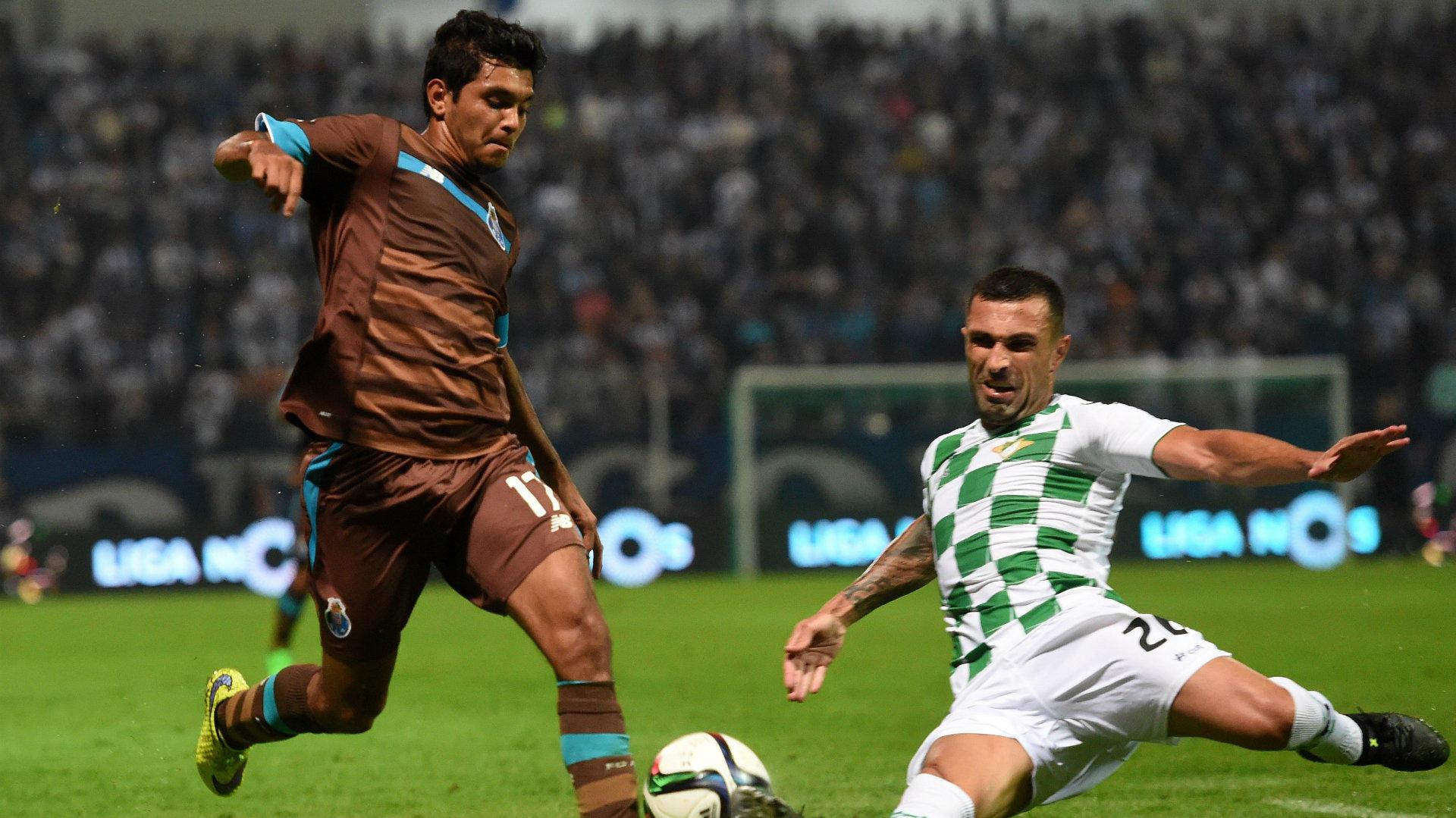 It's no surprise Ferretti's most in-form player is a midfielder playing at Porto. The eyebrow-raising part is that it's not Hector Herrera. In fact, the Rosarito native has fallen out of favor at the club level with countryman Jesus "Tecatito" Corona seeing more and more time on the wing. Corona comes in with four league goals in as many matches for the club he joined this summer.

Herrera or Guardado could slot inside and play next to Dos Santos, though this puts more defensive burden on either of them than in an ideal world. That frees up the opportunity to put one of Mexico's most dynamic players out wide in Corona. Some Mexico fans also have expressed that they'd like to see Corona partner Chicharito or another forward up top. He'd have to build fast chemistry with whoever his partner was and is probably better suited a bit more withdrawn, as he played in the Copa America.

THE MAN IN THE MIDDLE 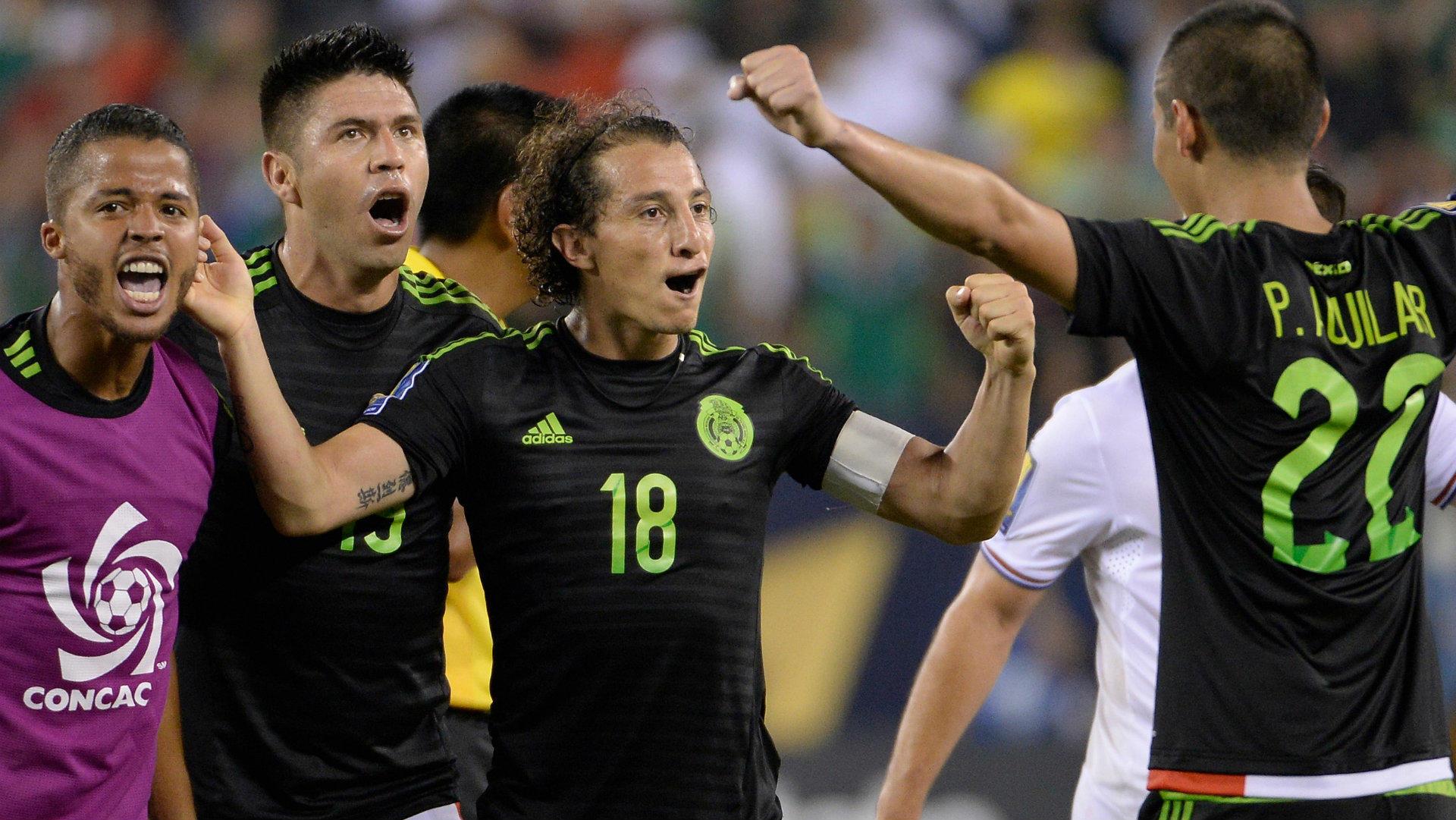 Popular TV show/radio program Futbol Picante tweeted a possible lineup Wednesday that kept Mexico in the 5-3-2 but also provided a better defender than Jonathan dos Santos in the middle.

The lineup brings Tigres left back Jorge Torres Nilo in at left back, pushes Layun into the midfield on the left and sees Guardado go central. This would be a departure from how Mexico has played in the recent past, or at least from the roles players have become accustomed to in the national team setup. But, it's a gamble Ferretti might be willing to make. Guardado is a solid defender, having played there during his career.

Another option that has bee reported is putting Marquez into the midfield and using a 4-3-3. 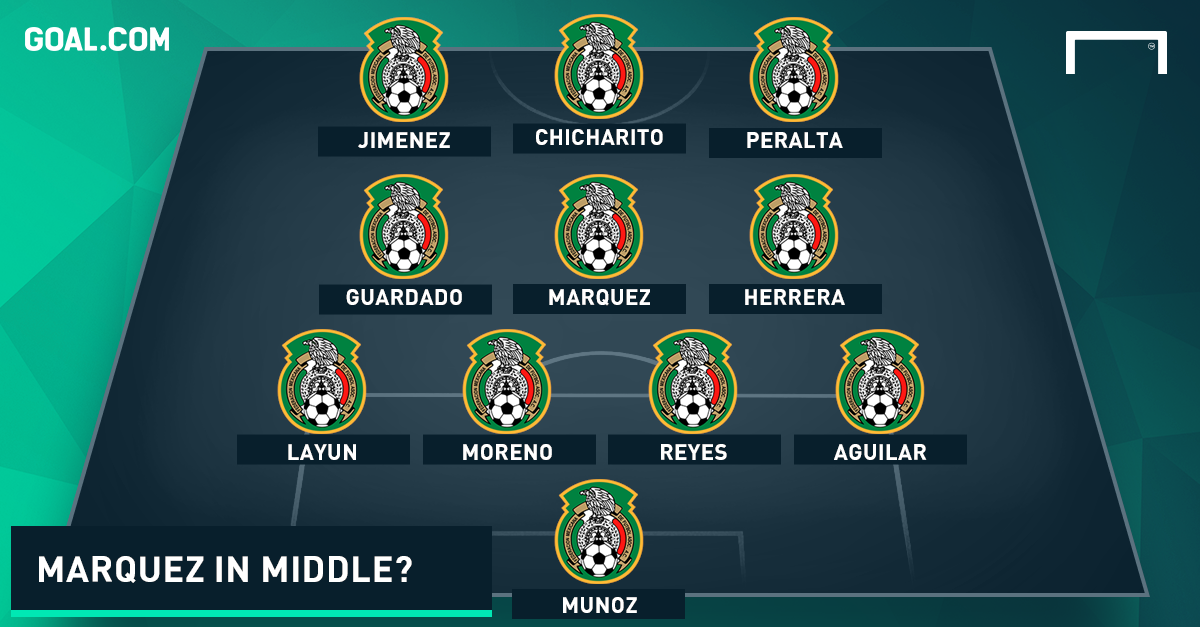 The possible alignment also sees Oribe Peralta as a starter and puts him up top with Chicharito and Jimenez. Peralta is in good form in Liga MX, but has scored the majority of goals from rebounds, caroms or deflections. Playing him next to Chicharito would mean a lot of service would be necessary from the outside to get the two players, who like scoring from headers or from second chances.

Layun loves to send in long-range shots and crosses, and the idea would be that he could do more of that if he didn't have to contend with his defensive responsibilities and could aid what might be Mexico's hottest strikers. Even so, it would be a defensive lineup, with Ferretti maybe leaning toward a cautious approach in a one-off game of great importance.

Mexico
Previous How Will the United States Line up Against Mexico?
Read

Next Carlos Bocanegra Hopes U.S. can Exorcise Demons of
Read

Without A Doubt, Confed Cup Mattered

No Shortage Of Potential Stars At Confed Cup Final

Low: Bravo Is A Penalty Killer

Draxler: Germany Must Be Better Against Chile

Infantino: VAR "The Future Of Football

Vidal: Chile Can Be Best In World