Argentina booked a quarter-final clash against Venezuela following a comfortable 3-0 win over Bolivia in the Copa America Centenario on Tuesday. 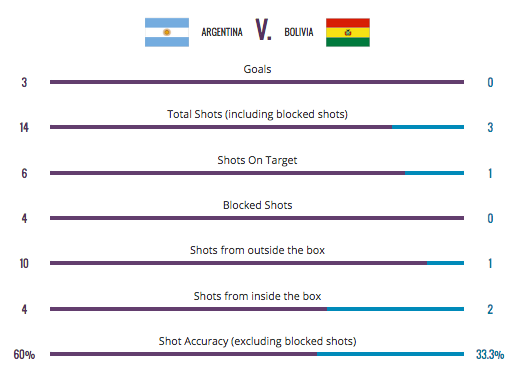 Lamela and Lavezzi scored within two minutes of each other, before Cuesta scored his first international goal in his first start just past the half-hour mark.

Lionel Messi was introduced at half-time but the goals dried up for Argentina in the second period, running out the 3-0 win at CenturyLink Field in Seattle, Washington.

Argentina will now face Venezuela in the last eight of the special-edition centenary tournament, while Chile meet Mexico.

With their spot in the quarter-finals already confirmed, Gerardo Martino elected to make six changes from the line-up that defeated Panama 5-0, but that did not mean it was a weakened team.

The likes of Sergio Aguero, Lavezzi and Lamela all came into the side, and it was the latter who got things going in the 13th minute.

It took Argentina less than two minutes to double their lead, with Lavezzi converting a loose ball in the area after Gonzalo Higuain had his shot saved by Lampe.

Cuesta had been drafted into the team to give Javier Mascherano a rest, and the central defender scored his first goal for Argentina in the 32nd minute.

Lavezzi capitalised on a blocked shot and played in a low cross for Cuesta, and the Independiente man stretched to get the crucial touch.

Higuain almost made it 4-0 heading into half-time but he had his shot blocked, before Messi was introduced in place of the Napoli striker for the second period.

Messi was immediately busy, much to the delight of the crowd, and had a curling free-kick on the hour-mark just miss.

As the half wore on Argentina applied less and less pressure on the Bolivia defence.

That did not stop them dominating possession, however, with Bolivia struggling to get a touch of the ball in their own half, let alone in the opposition's.

But Bolivia held firm in defence, keeping the scoreline to a somewhat respectable three-goal margin.