The United Bid Committee - the joint effort between the federations of the United States, Mexico, and Canada to win shared hosting duties for the 2026 World Cup - has shared the list of 32 potential host cities for the event.

The list includes four Canadian cities, three in Mexico, and twenty-five in the United States.

In a statement explaining the Committee's selection process, and detailing next steps in the bid effort, United States Soccer Federation president, and United Bid Committee chairman Sunil Gulati shared his hope that spreading the World Cup hosting duties across the continent would lead to an increased interest in and growth for the sport:

“As we move to the next stage of the bid process, we’re even more confident we have everything needed to deliver the largest, most compelling FIFA World Cup™ in history and help accelerate the growth of soccer across North America and around the world."

“We have more than double the number of cities required to stage matches in 2026. We have a vision for growing the game and engaging fans as never before. Our biggest challenge will be finding ways to honor the enthusiasm of all the people across Canada, Mexico and the United States through the development of our united hosting concept.” 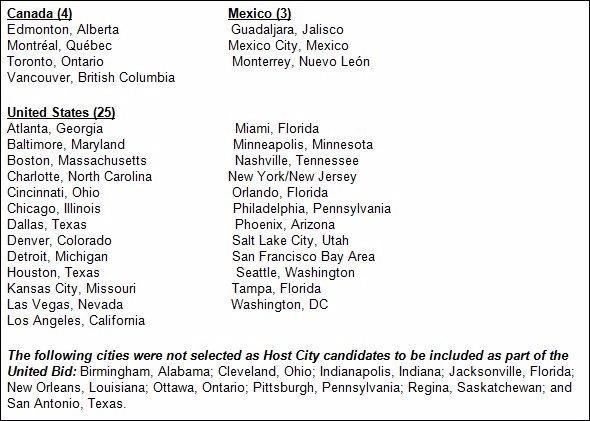