Jurgen Klopp said he felt overwhelmed with pride when his Liverpool players took a knee in support of the Black Lives Matter movement.

The Reds boss spoke of the multicultural representation within his squad and how it was the players who decided on Monday they should group together to show their support for protestors.

The death of George Floyd, an African-American man, in Minneapolis, Minnesota, last week in police custody has ignited debate and sparked demonstrations in the United States and beyond.

Calls for an end to institutional racism and for social change have been heard in cities worldwide.

Liverpool's players, like a number of sports stars with a platform, took the opportunity to show their support. In their case, they went down on one knee around the Anfield center circle before training on Monday.

Taking the knee has been a symbol of a protest against racial inequality and police brutality in the United States, most powerfully demonstrated by American footballer Colin Kaepernick during his NFL career.

Klopp told German broadcaster Sky Sport: "For us, dealing with each other and Black Lives Matter is very natural - especially if you look at our team: we have players from Africa, from England and so on with a corresponding background. It is already so natural for us that at first, we didn't even think about sending a message.

"But then the boys were struck. Then they spontaneously decided on this action. I've been very proud of the guys for a long time, but that was another extraordinary moment.

"When I saw them there and this picture was taken. Then I was really proud because it is also an important message." 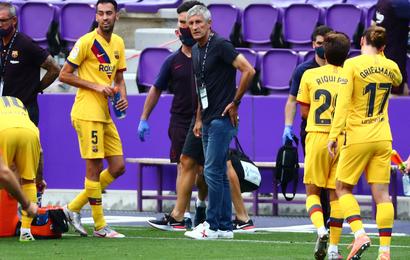