Odell Beckham Jr. expects his blockbuster trade from the New York Giants to the Cleveland Browns to be "one of the best things to happen in my life".

The Browns acquired Beckham and Olivier Vernon from the Giants last month in a deal that stunned the NFL.

In return, the Giants received Jabrill Peppers, Kevin Zeitler and the No. 17 and No. 95 overall picks in this year's NFL Draft.

“I want to be able to win a Championship. That’s the only reason we play this game.” — @obj pic.twitter.com/3WFqpKnJJB

The Browns held an introductory media conference for their new wideout on Monday, with Beckham lauding the organisation and expressing how excited he is to be with his new team.

"I think this moment is going to be more iconic than we all realise," Beckham said. "To look back in 10 years, like man I remember April 1, 2019, the start of something great."

Joined by quarterback Baker Mayfield, defensive end Myles Garrett and former LSU team-mate and childhood friend Jarvis Landry, Beckham conceded he was shocked to learn about the trade, but was keen to stress how grateful he is to be with the Browns.

"I'm very thankful for the opportunity to be here," he said. "Kind of the past is in the past. It was definitely a shock. I think I've come to grips with everything and processed everything ... but to see my guys here, I'm excited about this."

As for his new team-mates, Landry revealed he cried tears of joy, while Mayfield said he "just started screaming" when they heard news of the trade.

"This moment is going to be more iconic than we all realize right now."

"I feel like we spoke this into existence. Him and I dreamed of this … this is surreal," Beckham said of playing in the NFL with Landry.

"I'm excited and I think it's going to be one of the best things to happen in my life."

New Browns coach Freddie Kitchens was also on hand during the introductory news conference, and told the media he did follow through with his promise to tell Beckham he loved him during their first meeting. 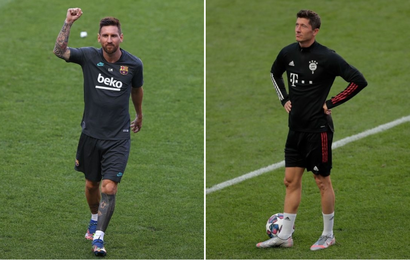