Damian Lillard took satisfaction in sending the Oklahoma City Thunder out of the NBA playoffs after seeing his celebration mocked earlier in their first-round series.

The Portland Trail Blazers advanced to the conference semi-finals in spectacular fashion on Tuesday, Lillard's 37-foot buzzer-beater securing a 118-115 victory and a 4-1 triumph overall.

Having gone 2-0 up in the series, the Trail Blazers were defeated in Game 3 – a contest that saw the Thunder's Dennis Schroder imitate Lillard's 'Dame Time' celebration by tapping his wrist.

And those actions did not sit well with Lillard, who marked his remarkable game and series winner by waving to the Thunder bench before being mobbed by his team-mates.

"The game, the series was over, that was it. I was just waving goodbye to them," said Lillard, who became the first player in NBA playoffs history to score 50 points as well as a game-winning buzzer-beater.

"After Game 3, Dennis Schroder was out here pointing to his wrist, they were out there doing all these celebrations, doing all this stuff and we kept our composure.

"After one win that was what they decided to do, and we were just like, 'Okay, what we want to do is win four games' and then when we win those four games there's not gonna be nothing to talk about so that's what that was."

On his winning basket, shot over Paul George, Lillard said: "I was standing there looking at the rim and I was like, 'This is a comfortable range'.

"My trainer Phil Beckner, we were working out the other night in OKC and he was like, 'Take a few deep ones'. He was like, 'You're gonna hit one of these' and when I was standing there I was like, 'I'm gonna shoot it'.

"I just had to let it fly, shoot the ball high in the air to give it a chance and that's what I did." 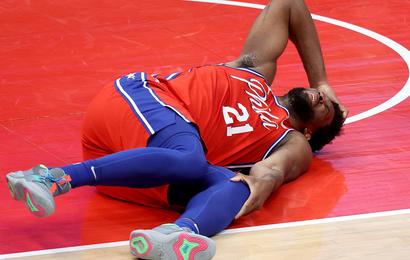