Atletico had lost the Madrid derby in their last league fixture, ending a 26-match unbeaten run in the competition.

But there was little danger of them suffering a second straight top-flight loss from the moment Suarez put them in front four minutes before half-time on Saturday.

Suarez added a second after the break as he emphatically ended a three-match run without a goal.

Lucas Boye headed in to give Elche hope, but Atletico sealed all three points when substitute Diego Costa converted a penalty with 10 minutes remaining.

Atletico thought they had won an early penalty when Joao Felix's through ball led to Suarez being tugged back by John Donald, only for a VAR check to reveal the striker had strayed offside.

Elche goalkeeper Edgar Badia used his legs to keep out a swerving drive from Marcos Llorente, who also blazed over from another opportunity later in the first half.

Badia then denied Thomas Lemar but there was nothing he could do when Suarez got a faint touch on Kieran Trippier's accurate cross to divert it into the far corner from six yards.

And it was Suarez who appeared to have put the result beyond doubt after 58 minutes, as he slid in to convert Yannick Carrasco's angled left-wing cross from close range at the far post.

Elche got back into it six minutes later when Boye headed into the roof of the net after Tete Morente did well to flick a corner into his path.

Joao Felix limped off for Atletico in the closing stages with what head coach Diego Simeone will hope is not a serious problem.

But aside from Jan Oblak denying Boye, the Joao Felix substitution was the only concern of note, one that meant Costa came off the bench to return from injury after a month out.

The striker made a quick impression, winning a penalty when he drew a foul from Ivan Marcone before taking the spot-kick himself and sending Badia the wrong way. 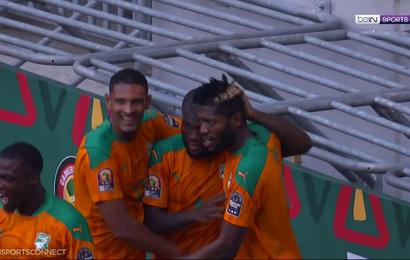 Egypt to 2nd round of AFCON after beating Sudan

Nigeria cruise into AFCON's group of 16