Antoine Griezmann was named on the bench for Barcelona's LaLiga meeting with Atletico Madrid, for whom Joao Felix was left out of the starting line-up.

Quique Setien selected just two regular attackers for the visit of Atleti to Camp Nou on Tuesday, with Lionel Messi and Luis Suarez joining forces in attack as the reigning champions looked to regain top spot from Real Madrid.

Former Atleti forward Griezmann was joined on the bench by Ansu Fati, who was handed a starting berth in the 2-2 draw against Celta Vigo at the weekend.

Holding midfielder Sergio Busquets took the place of Fati following his return from suspension, with the only other change seeing Clement Lenglet replace Samuel Umtiti.

⚽️ When it’s over we will see you on Barca TV+ with post game analysis and reactionshttps://t.co/v28AM27Zzq#OnlyForCulers https://t.co/psMwJFGESb

Diego Simeone made five alterations to the team that started a 2-1 win over Deportivo Alaves on Saturday.

Joao Felix and Alvaro Morata dropped to the bench, while Koke missed out through suspension. Diego Costa, Marcos Llorente and Yannick Carrasco were drafted into the line-up in their places.

Santiago Arias and Felipe were named in defence, with Kieran Trippier on the bench and Stefan Savic absent due to a ban.

Ruben Garcia Gets Opener For Osasuna Off Free Kick 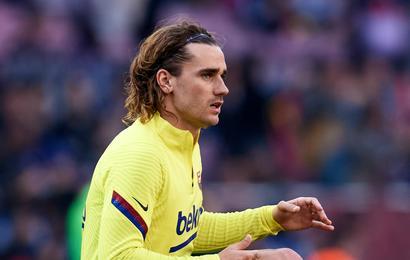