Atletico Madrid's home game against Athletic Bilbao has been postponed due to Storm Filomena blanketing the Spanish capital in snow.

The match was due to take place on Saturday afternoon but a new date must now be found.

Our fixture 🆚 @Athletic_en has been postponed due to the winter snow in Spain.

Atletico, who led the LaLiga table heading into the weekend, said their opponents had been unable to make the trip, and that conditions were so treacherous that anyone attempting to travel to the Wanda Metropolitano stadium would be putting themselves in danger.

In a statement, Atletico said: "The match that we were supposed to play today against Athletic Club at the Wanda Metropolitano has been postponed due to the snowstorm affecting much of the peninsula.

"The inclement weather prevented the Basque team from travelling to Madrid due to the temporary closure of the Madrid-Barajas Adolfo Suarez Airport and, in addition, the travel of our team, referees and club staff to the stadium was not guaranteed to be safe due to the poor condition of the roads in the community of Madrid.

"Faced with this situation, LaLiga has requested this morning the postponement of the match to the professional competition committee, given the exceptional circumstances caused by inclement weather, and the latter has ratified the decision not to play the game today as planned. The date of the match will be announced in the next few days." 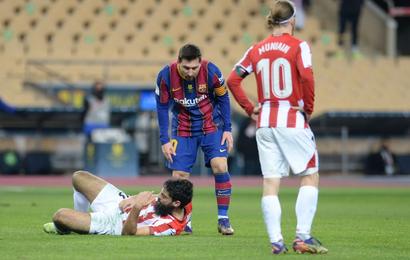