Player of the Round: Ter Stegen

Marc-Andre Ter-Stegen take a bow! Barcelona’s 2-3 El Clasico victory would not have been possible had it not been for the German wall of steel occupying the Catalans' goal.

In one of the greatest performances of his career to date, Ter Stegen was at hand, time and time again, to keep the likes of Ronaldo, Kroos, Modric, Asensio, Benzema and Bale off the scoresheet, basically ANYONE dressed in white not named Casemiro or James Rodriguez.

The blonde net-minder made history along the way by tallying 12 saves, his busiest shift between the Barcelona sticks since joining the club and the highest number notched up by a Barca keeper in a single LaLiga match since 2003/04.

Perhaps wall of steel doesn’t even cut it? Taking any and all suggestions on Twitter using #LaLigaFile!

James Rodriguez, the Santiago Bernabeu savior! It was a great story…while it lasted.

James was ZInedine Zidane’s final substitution, coming on in the 82nd minute for Karim Benzema with Los Blancos trailing 1-2 on home soil.

A Marcelo cross took a slight deflection off of Ivan Rakitic, bounced off the turf before landing perfectly for the Colombian to stir it home with aplomb.

Leveling the board in El Clasico four minutes after stepping onto the pitch and sending the Santiago Bernabeu into raptures is about as good as a ‘super-sub’ gets.

Unfortunately for James though, his super-sub moment of glory would soon be overshadowed by Lionel Messi.

Although he was on the losing end of this match-up, Asensio was once again a standout performer for Real Madrid and once again exemplified the vertigo-inducing depths of Zizou's squad.

The 21-year-old came on for an injured Gareth Bale in the 39th minute and made his presence known from the off, driving at the Barcelona back line and creating chances like his life depended on it.

And for those of you who have forgotten, Asensio only cost Real Madrid 3.5 million euros. Bargain of the century.

Goal of the Round: The Almighty Messi

Lionel Messi scored his 500th goal for Barcelona across all competitions in not only the most fitting of venues but in one of the greatest ‘El Clasico’ battles in recent history.

Messi opened the scoring for Barcelona in the 33rd minute with his 499th career goal to bring the Blaugrana level at a goal apiece.

His 500th would come in the most dramatic of fashion as Barcelona, with one last-gasp roll of the dice to win the match remaining, left it to Leo.

WHAT IS LALIGA FILE?

LaLiga File is your one stop shop for a look back at the latest round in the Spanish top-flight. Sometimes it’s serious, sometimes its cheeky, but it always strives to bring you a sassy synopsis of (one of) the world’s best leagues. Tweet at us @beINSPORTSUSA and @gabbyamado using the hashtag #LaLigaFile with your comments, questions and, if you must, complaints.​ 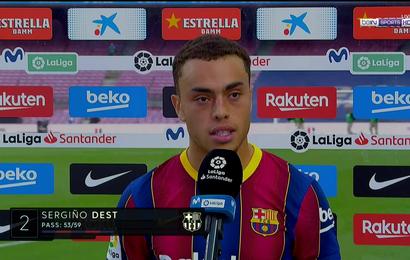