Lionel Messi railed against refereeing decisions as Brazil knocked Argentina out of the Copa America, the Barcelona star's rage coming after he suffered yet more international heartbreak.

Messi lost international finals in 2014, 2015 and 2016 but Argentina fell in the last four of this year's tournament, Brazil running out 2-0 winners in Belo Horizonte on Tuesday.

His lack of success for the national team - outside of the Under-20 World Cup in 2005 and striking gold at the Olympic Games three years later - contrasts sharply with his club career, with Messi inspiring Barcelona to 10 LaLiga titles as well as four Champions League crowns.

Messi will likely have another shot at glory as the Copa America is being held again in 2020 - Argentina are co-hosts with Colombia - but how have things gone wrong for him in Albiceleste colours? When measured against the all-time greats, one thing has always proven to be easy pickings for Messi's detractors – unlike Pele and compatriot Diego Maradona, he has not won a World Cup.

That argument could have been laid to rest in Brazil, where Messi scored four goals to help Alejandro Sabella's side secure a final clash with Germany.

But Messi was below-par at the Maracana and Argentina fell to a 1-0 extra-time loss courtesy of Mario Gotze's goal, with the Barca star having fired a late free-kick off target.

He was named the player of the tournament in the immediate aftermath but showed little interest in the award as a far greater prize had just slipped through his fingers. 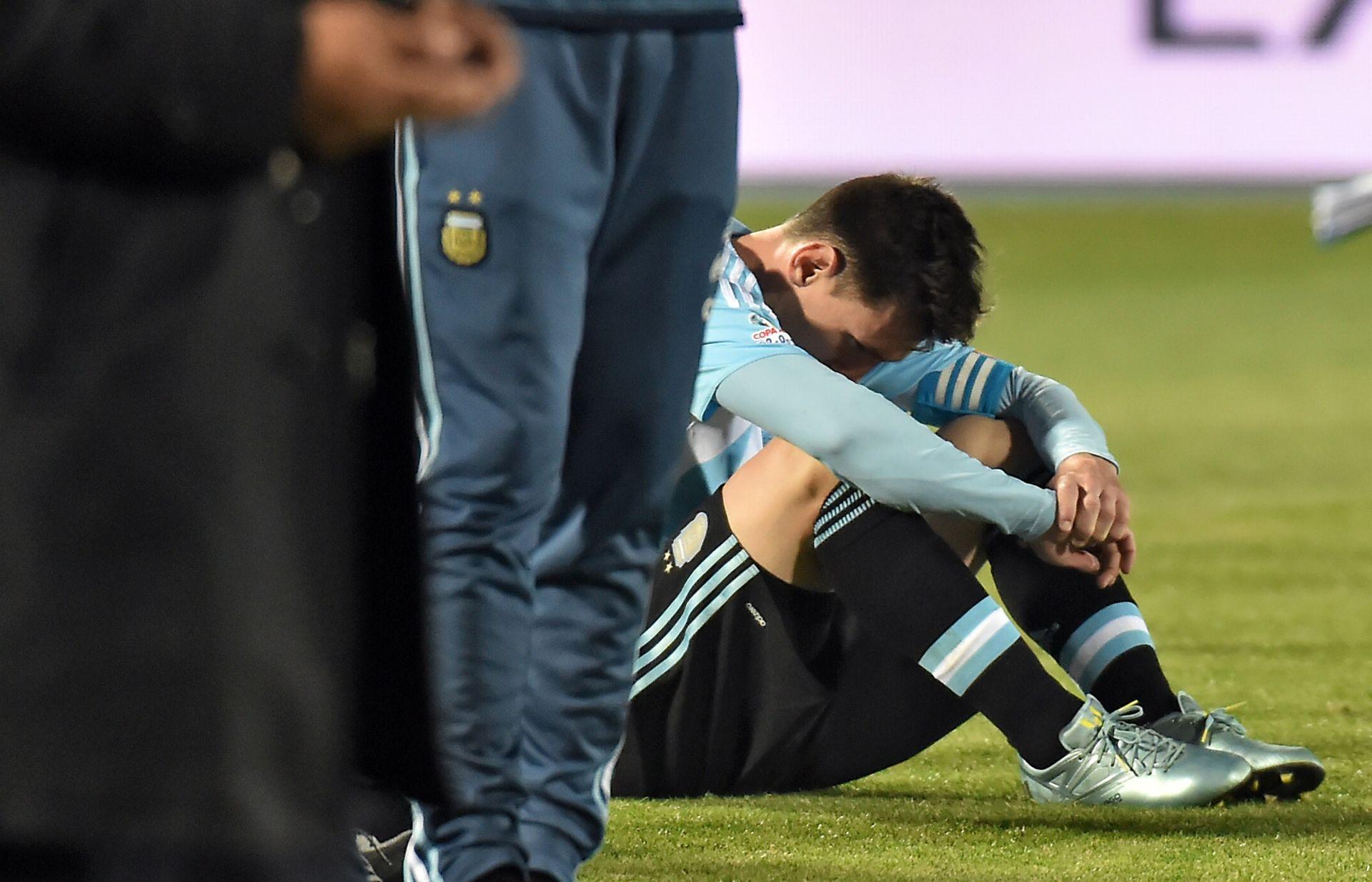 Messi did not shy away from his spot-kick duties when the 2015 Copa America final went to penalties against hosts Chile.

At the end of a tournament in which Messi scored just once, he stepped up to take Argentina's opening effort, just as he had in the quarter-final win over Colombia.

The result was the same – Messi found the net. However, he was then reduced to the role of spectator.

And what followed was agonising to watch for the forward, as misses from Gonzalo Higuain and Ever Banega preceded Alexis Sanchez's decisive strike. The Copa America Centenario proved a far more productive one for Messi, who hit five goals in Argentina's march to yet another final against Chile.

Gerardo Martino's men scored 18 times in the United States, including a 2-1 triumph over Chile on their way to winning Group D.

But when the final rolled around, the goals dried up, with a 0-0 stalemate ensuring more shoot-out drama.

Messi again went first, but this time blazed over the crossbar as Chile defended their title. The crushing blow of the subsequent loss forced him into a decision to retire from the international game, though he later changed his mind. After a poor qualifying campaign, Messi dragged Argentina to Russia 2018 single-handedly with a stunning hat-trick against Ecuador, but he could not repeat the magic at the tournament.

A superb goal against Nigeria helped Jorge Sampaoli's side squeeze through the group stage, Argentina having opened with a draw against Iceland before losing 3-0 to Croatia.

But despite Messi recording a brace of assists in the first knockout round, France ran out 4-3 winners in Kazan on their way to winning the trophy.

Argentina captain Messi subsequently refused to speak to the media and took nine months out of the international spotlight amid speculation he would not play for his country again. 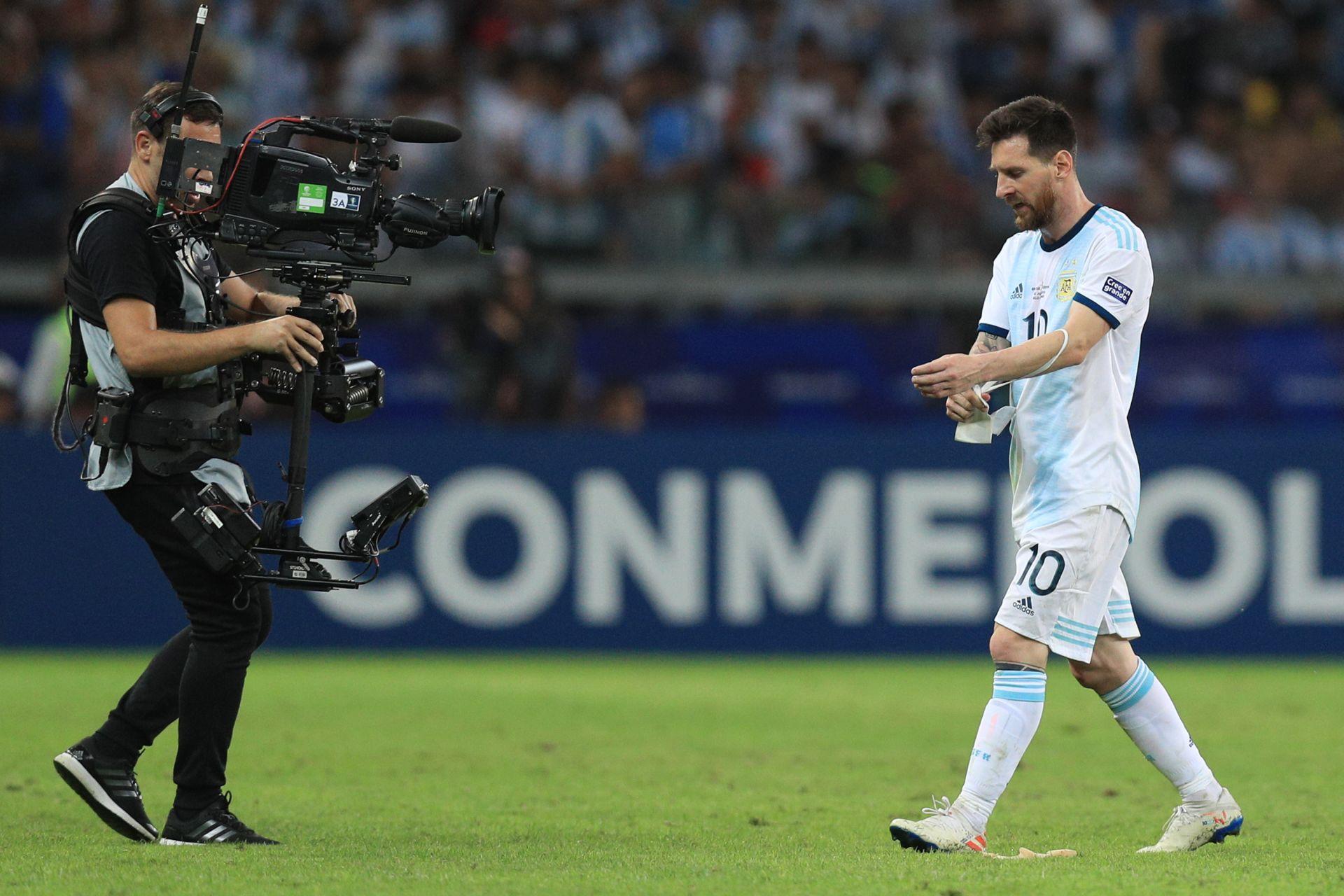 Messi did return to play for his country in the build-up to the Copa America, but there was yet more disappointment for the 32-year-old on the international stage.

He struggled to show his best form in Brazil, with a penalty against Paraguay his only goal of the tournament heading into the semi-finals.

Although unplayable at times in Belo Horizonte, Brazil's defence kept a fifth clean sheet in a row as Messi struck the post with a shot and set up Sergio Aguero for a header that hit the crossbar.

Whether Messi, who argued Aguero should have had a penalty at 1-0, is willing to put himself through the hurt again remains to be seen, but the chance to have one last Copa crack - and on home soil - will be tempting.

Next Aguero Rages Over VAR After Argentina's Copa Ameri
Read