Many of the world's best players will be on show in Brazil over the next few weeks for the 2019 edition of the Copa America, but there will also be some talents hoping to use the tournament as a springboard.

For every Lionel Messi, Sergio Aguero, Luis Suarez and James Rodriguez there will be a less familiar name attempting to establish himself on the international stage, potentially earning a big move.

The tournament sees the traditional CONMEBOL nations take part, plus guests Qatar and Japan, the latter of whom have named a squad mostly made up of players likely to feature in next year's Olympics.

With the Copa America starting on Friday, we have spoken to the experts to identify one potential breakout star to watch for each nation. Tom Webber (Brazilian football expert): Following a stellar season with Champions League semi-finalists Ajax, Neres has a great chance to make his mark on the international stage. The 22-year-old winger is expected to be handed a starting role following Neymar's injury-enforced withdrawal, despite only making his first start in the 7-0 demolition of Honduras on June 9. Neres scored 12 goals and supplied 11 assists in all competitions for Ajax in 2018-19 and appears primed to make a mark on the Copa America, with plenty of interested parties likely to be keeping a close eye on him.

Andres Mendez Dott (Bolivian football expert): Saavedra is a direct and explosive midfielder who started his career as right-back but now plays further forward. At the age of 23, he is closing in on 200 appearances for Bolivar and had a short spell at Brazilian side Goias. Humble off the pitch, he is rather more audacious on it, as he is not afraid to shoot from distance or take on defenders. Coach Eduardo Villegas is still undecided about his starting midfield, but we can expect Saaverdra to be a part of it. There are some rumours he might be deployed on the left, but either way, if he gets the ball and some space, you can count on him testing Dani Alves or Filipe Luis against Brazil. The Copa will be very challenging for Bolivia, but Saavedra could make his mark.

Diego Montalvan (Peruvian sports journalist): If there's one player to watch in the Peru side, it's 23-year-old Renato Tapia, coming off arguably his best season in Europe with Willem II. The tournament will also enable him to put himself in the shop window, as he is reportedly looking for a transfer away from parent club Feyenoord. A central midfielder who can also fill in defensively, for Peru Tapia generally plays the role of destroyer to Yoshimar Yotun's creator, but if given the freedom to move forward he can create and even chip in with a few 'golazos'. 'El capitan del futuro', as he is called by many in Peru, is already an undisputed starter, but if he wants to stay in Europe he will have a point to prove in Brazil.

Daniel Alvarez Montes (Venezuelan sports journalist): Farinez was part of the Venezuela squad in Chile for the 2015 Copa America when he was just 17. Many criticised then-coach Noel Sanvicente for that decision, knowing Farinez was not going to play. However, Sanvicente insisted it was a great opportunity for Farinez to grow. Four years later, we can say that decision was arguably his best one while in charge of La Vinotinto. Farinez played a significant role for Venezuela's youth sides after that, making a huge impact in tournaments at several age levels. Currently playing for Millonarios in Colombia, the Copa America will be a massive opportunity for him to show the world what he is capable of. Europe could be his next stop, with Benfica front-runners to acquire him. Peter Coates (Buenos Aires-based football writer): Finding a balance in midfield, linking defence to attack and crucially providing a partner for Lionel Messi have been issues for Argentina for several years. A new-look squad for the Copa America sees much of that responsibility fall on the shoulders of Lo Celso and coach Lionel Scaloni has already spoken highly of the 23-year-old, hoping the Real Betis playmaker and the world's best player can reproduce a relationship he has already witnessed on the training field. Something akin to an old-fashioned 'enganche' of yesteryear, Lo Celso will operate in the spaces behind the striker and allow Messi to roam off the right with his usual menace. The Rosario Central product's eye for a pass, ability to work in tight spaces and sweet left foot could make him the ideal partner for Messi and crucial to La Albiceleste's success.

Roberto Rojas (Paraguayan journalist): Rojas is expected to be La Albirroja's breakout player in this Copa America. A product of the esteemed Cerro Porteno academy, the 23-year-old followed the path of various Paraguayans looking to get their first break abroad by heading to Argentina, where he was initially loaned to Lanus in 2017, before joining modest Defensa y Justicia the following year. He became a key player for Sebastian Beccacece's team, who secured an historic second-place finish in the 2018-19 Superliga. A central midfielder known for his passing and dangerous set-pieces, Rojas has already signed a contract to join Racing Club, who finished just ahead of Defensa y Justicia. Paraguay manager Eduardo Berizzo is likely to play Rojas in a 4-3-3 formation, where he will be expected to combine with Newcastle United's Miguel Almiron as the team's two-man creative hub.

Martin Lowe (Asian football expert): Ali went from relative obscurity to the name on everyone's lips at the Asian Cup, finishing as the highest-scoring player and breaking Ali Daei's record with nine goals from seven matches as Qatar claimed a surprise success. A languid target man with strength and the eye for a goal, he threatens from even the trickiest situations and cemented his MVP status at the Asian Cup with an outrageous bicycle kick in the final. Ali – born in Sudan – remains a contentious case amid questions over his eligibility, but he has been allowed to continue representing Qatar. He blossomed in a number of international youth teams, tending to fill his boots whenever he got the opportunity. His all-round game has improved, having been shifted out wide for his club side Al-Duhail, but he is mostly used as a static focal point with more creative types such as Akram Afif and Hassan Al-Haydos playing off him.

Simon Edwards (South American football writer): Diaz is a hugely exciting winger who will be tasked with bringing fresh impetus to Colombia off the bench. He was spotted by Carlos Valderrama and 'El Pibe' recommended Junior snap him up. He has become a star of Colombian league football, with offers received from River Plate and Cardiff City. Diaz plays with the fearless enthusiasm and the joy of a child, but has also complimented his unpredictable, weaving dribbles with goals and improved defensive discipline. He is now a complete attacking midfielder who tracks back and provides a threat. Diaz draws defenders but has the skill and invention to craft a solution. 'Luchito' will take risks and lose possession occasionally, but he also has the quality, pace and confidence to have a huge impact for this Colombia side. 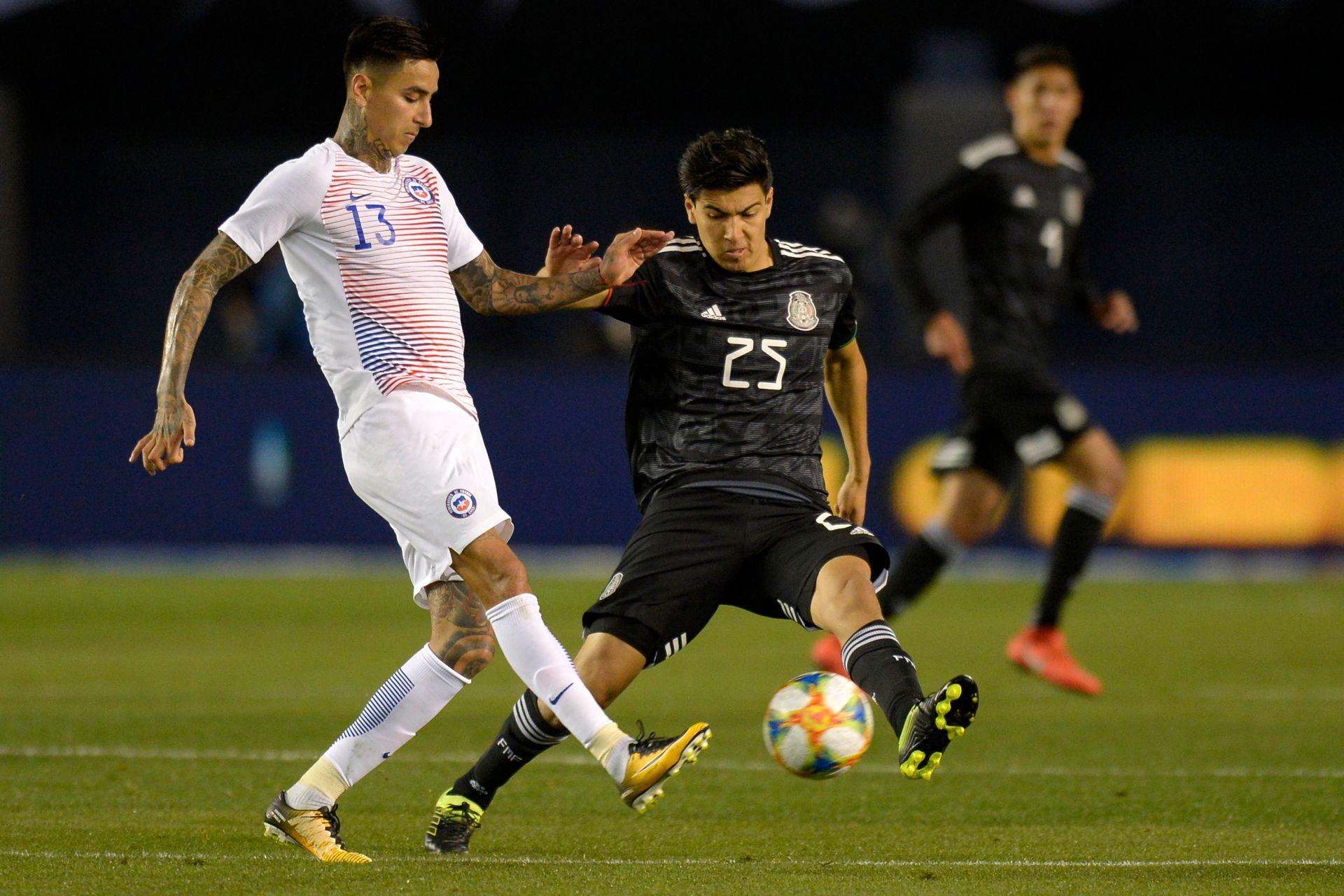 Adam Brandon (Chile-based South American football writer): Erick Pulgar will probably be given a chance to shine in central midfield in the Copa America after his stellar season with Bologna in Italy. The 25-year-old is good on the ball, passes well and can play a more defensive role as well. He also boasts an excellent penalty record, which could come in handy for Chile again in this Copa America, given how the 2015 and 2016 finals were won.

Stuart Smith (Japan-based football writer): Japanese fans will line up to tell you 18-year-old attacker Takefusa Kubo, currently with FC Tokyo but almost certainly headed to a big European club very soon, is the Samurai Blue's player to watch. Small, fleet-footed and not afraid to try tricks, he has shown a maturity beyond his years this season in the J.League. He spent his formative years at Barcelona's famed La Masia, and his technical ability is a testament to that period. Excellent with both feet, extremely skilful and able to spot and drift into spaces that other players cannot, Kubo has the potential to develop into an outstanding player. Coach Hajime Moriyasu will try to manage expectations, but it will be difficult to keep such a talented player off the pitch for too long.

Xavier Zavala (Ecuadorian football analyst): Coach Hernan Dario Gomez will implement a defensive approach that will appeal to Mendez's greatest strengths, which are his tackling efficiency and relentless motor. The 22-year-old midfielder has shown he is capable of man marking without being rash or overly aggressive and his position with Ecuador will be similar to at Orlando City, where he plays a deep-lying role. The challenge he has is dislodging the Liga de Quito partnership of Jefferson Orejuela and Jefferson Intriago, but given the stamina the system used by 'El Bolillo' requires, rotation is to be expected. Once Mendez gets his chance, he will be in a position to prove his worth.

Nick Dorrington (freelance South American football journalist): Nandez is an all-action midfielder who has become a regular for Uruguay over the last year or so, usually playing off the right-hand side. A boundlessly energetic little terrier of a player, he snaps away at the heels of opponents, runs up and down and back again, and gets the ball forward quickly. He is also capable of moments of genuine quality, such as the ball he played through to release Dario Benedetto for Boca Juniors' goal in their Copa Libertadores final defeat to River Plate in December. Linked with a move to Europe, the Copa America could be a useful shop window for the 23-year-old.