Gareth Bale saw a goal disallowed as Barcelona and Real Madrid played out a 0-0 draw at Camp Nou on Wednesday.

LaLiga's top two went into the contest level on points this season and with 72 wins each from previous league meetings, and there was nothing to separate them in a tense clash in Catalonia.

The match was rearranged from October after the initial date became a security risk due to the prospect of Catalan independence protests, and there were fans inside and outside the stadium making their voices heard over one of Spain's most divisive issues.

The action on the pitch was a little less fraught, Bale's second-half strike - ruled out for offside - representing the closest either side came to breaking the deadlock.

Madrid controlled the early exchanges and only Gerard Pique's timely intervention on the line denied Casemiro an opening goal with a header.

Marc-Andre ter Stegen beat away another Casemiro effort after Madrid had penalty shouts waved away following a shirt pull on Raphael Varane, who had earlier squared up to Jordi Alba.

Thibaut Courtois went untested until the half-hour mark, when he palmed away a teasing Alba cross and the covering Sergio Ramos cleared Lionel Messi's rebound from in front of goal.

Alba had a golden chance to snatch the lead before half-time but could only side-foot wide of the right-hand post following a sublime lofted pass from Messi.

The second half proved more of an end-to-end affair, Bale rippling the side-netting and then seeing celebrations cut short when his tap-in was disallowed after a VAR review for an offside against Ferland Mendy.

A frustrated Messi made a mess of a chance just inside the box, failing to connect cleanly with the ball to sum up a clash surprisingly short on attacking quality.

Now for Real Madrid! No surprise! Karim Benzema leads the line, he's been in fine form at the moment! Gareth Bale also starts in the front three. Can he be the difference-maker tonight?

Team News! Leo Messi Starts for Barcelona! Clément Lenglet partners with Gerard Piqué at the back.

⚠️ There has been a change to the starting 11 for #ElClásico. pic.twitter.com/AdpM0aKTtx

A little insight to the Barca dressing room tonight...

Wouldnt be surprised if this man got on the score sheet today!

We have El Clasico legends left, right and centre today! We had a sit down with David Beckham to talk about the Qatar 2022 World Cup. Three years to the final today!

Fancy testing yourself with this handy El Clasico quiz? Oh, Go on then!

Can Karim Benzema be the difference-maker tonight? This rather considered take on the French forward is a LOVELY primer to the action tonight. 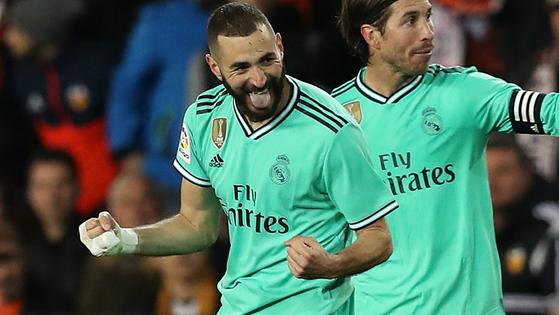 Aarran Summers has been a busy boy this week! Why don't you enjoy this lovely chat with Real Madrid legend Steve McManaman ahead of the El Clasico!

Real Madrid has arrived in Barcelona. Can Zizu mastermind a win at against his sides biggest rivals?

🏨☑️ Checking in to our hotel in Barcelona! We’ll rest up and go over our final preparations ahead of #ElClasico! #HalaMadrid pic.twitter.com/HTgiudt8jC

Another record tonight for Lionel Messi, he is just that good!

#Messi will equal Xavi Hernández with 4⃣2⃣ #ElClásico's played! 💪
The most in Barça's history 🙌 pic.twitter.com/sTfJqBfcl1

Hello! Welcome to the LIVE Stream and updates for El Clasico. With both sides level on points at the top of the table, a win for Real or Barcelona could be crucial in where the La Liga title lands this season. As ever, join me for al the build-up, team news and yes the goals from the game at the Nou Camp!