The Turkey striker smashed a penalty in off the post after just four minutes before firing in an impossible second from outside the box before the break, his 15th goal of a remarkable season, to seal victory and give Lille a four-point lead over Paris Saint-Germain.

PSG faces a tricky trip to Rennes on Monday (AEST), and must win to keep its title defence intact.

Should it lose, Christophe Galtier's Lille side can seal the title against Saint-Etienne in its penultimate game of the campaign on 17 May (AEST).

Lens playmaker Gael Kakuta said earlier in the week that he would rather see PSG be crowned French champion than Lille at the end of the campaign – something Yilmaz took great exception to ahead of this derby.

The Turkish striker did his talking with the ball, and was on the scoresheet just minutes into the game, crashing a penalty beyond Jean-Louis Leca after Jonathan Bamba was fouled in the box in the second minute.

Lens might have returned fire minutes later when Ignatius Ganago found Seko Fofana in space, but the Ivorian sent a tame first-time effort into the gloves of Leca's opposite number, Mike Maignan.

Lens has been excellent since winning promotion last season, and kept chipping away at the visitors, Ganago forcing a pair of saves from Maignan before half-time.

But the task was made significantly harder when Clement Michelin was given his marching orders after receiving two yellow cards, the first for a late challenge on Yilmaz and the second for leading with his arm in an aerial challenge.

The Turkey striker took full advantage at the end of the half, firing a stunning second into the top corner on his nominally weaker left foot from well outside the box.

Lille came close to a third after the restart. Luiz Araujo let fly from the edge of the box but Leca pulled off an excellent save at his near post.

Sven Botman then forced Leca into another stop, his looping header from a Xeka corner threatening to sneak in under the crossbar.

Xeka dragged wide an effort of his own just before the hour, but Lille eventually found its third when Leca made a mess of a long-range Bamba drive. Canadian Jonathan David was on hand to smash home his 12th goal of the campaign and make things even more comfortable for Lille.

Lens battled on bravely, and Ganago saw an acrobatic attempt from close range fly narrowly over. But the hosts were always swimming against the tide.

Timothy Weah, who came on for David, had his first chance within minutes of his introduction with a low shot across Leca which beat the keeper but also the far post.

Jose Fonte then headed a late chance off target before Maignan denied Fofana at the other end as the match it ended 3-0. 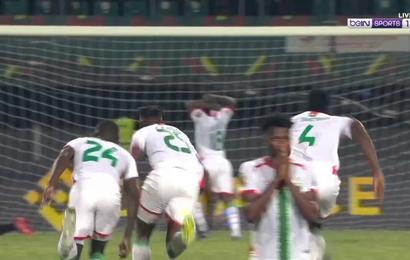