Savvidis invaded the pitch along with members of his security detail after PAOK's Fernando Varela had what he thought was an 89th-minute winner rule out for offside.

The Georgian-born tobacco and media tycoon was wearing a pistol in a holster on his hip, although he did not brandish it in the ensuing furore that saw AEK players leave the field before the match was abandoned at 0-0. 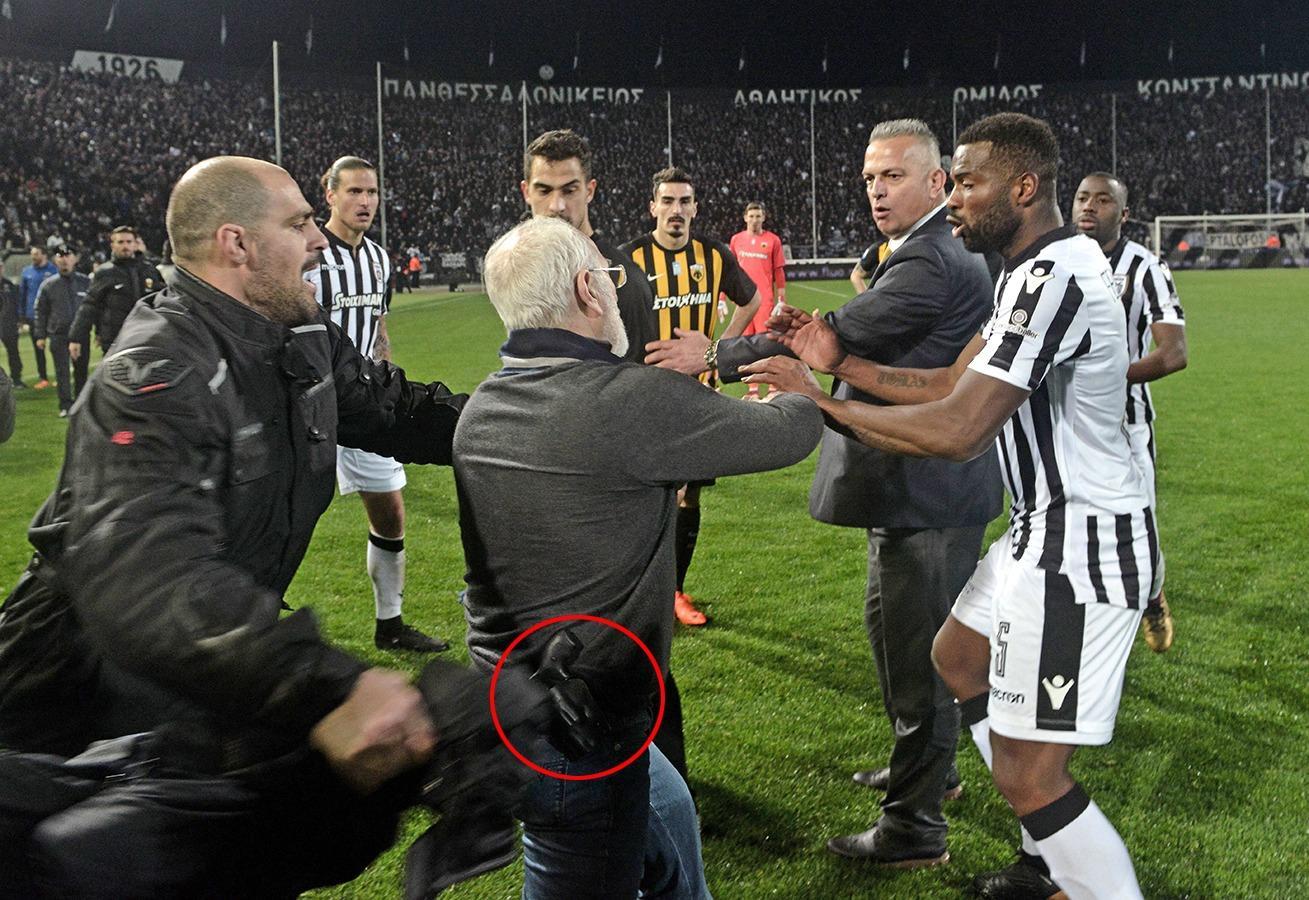 Greece's Deputy Minister of Sport George Vassiliadis announced that the country's top flight was "on an indefinite interruption", pending proposals from the Superleague and the Greek Football Federation (HFF).

In a statement on PAOK's official website, Savvidis offered a lengthy apology, albeit one peppered with references to what he believes to be a "totally ill soccer establishment" in his adopted country.

"I want to apologise to all the fans of PAOK, all Greek fans, the global football community. I am very sorry for what happened. Clearly I did not have the right to go out on the pitch in this way," Savvidis said.

"My emotional reaction has been caused by the generalised negative situation prevailing in Greek football lately and by all the unacceptable, non-athletic events that took place towards the end of the PAOK-AEK - the actions of the referee and the supervisor (goal - offside - goal), the interruption of the match, the protests and the entry into the playing field of dozens of people of both teams."

Savvidis went on to claim his intention was to protect PAOK fans and made further allusions towards football in Greece being systematically unfair.

"All of this created a degraded situation on the pitch and my only goal was to protect tens of thousands of PAOK fans from provocations - complications - human casualties," he added.

"Believe me, I had no intention of interference with the opposing team or the referees. And I certainly did not threaten anyone.

"Unfortunately, both me and my family, as well as my colleagues, have been hostages of the totally ill soccer establishment.

"I am struggling and will continue to strive, despite the constant attacks I take at all levels, for a fair football with honest arbitration in all the races and for winning the championships on the courts rather than in the courts.

"Once again, I apologise."

Despite Savvidis's apology, the European Club Association – the UEFA-recognised body representing the interests of professional clubs across the continent - has moved to suspend PAOK's membership on account of his actions.

In a statement, the ECA said it "strongly condemns" Savvidis' behaviour and added: "In light of this, and in accordance with the ECA Statutes, the ECA Executive Board unanimously decided to suspend, with immediate effect, PAOK FC as member of the European Club Association.

"ECA exists to protect the integrity and regularity of competitions and matches as well as the sporting values and principles on which European football is based."

The suspension will be reported to the ECA general assembly in Roma on March 27.

Games were suspended in all divisions after referee's chief Giorgos Bikas was the victim of an arson attack in November 2016, while investigations into a match-fixing scandal that came to light in 2011 remain ongoing.

Two weeks ago, PAOK's home game with Olympiacos was abandoned before kick-off when visiting coach Oscar Garcia was struck by an object thrown from the stands. PAOK were initially docked three points but overturned the decision on appeal.