Raheem Sterling was England's hero as a turgid Nations League encounter with Iceland exploded into penalty drama in the final minutes, with Gareth Southgate's men emerging as 1-0 victors.

Harry Kane had an early goal incorrectly ruled out but it soon became a tale of frustration for England against the side who famously humiliated them against the odds at Euro 2016.

Kyle Walker's red card teed up the prospect of another ignominious outcome, but Sterling won a spot-kick in the final minute when Sverrir Ingason – who, like Walker received a second booking – handled his shot following a right-wing corner.

The Manchester City forward rolled his effort home before a further stoppage-time sting in the tail.

Joe Gomez clumsily fouled substitute Holmbert Fridjonsson in the box, although Birkir Bjarnason opted for a contrasting approach to Sterling's and blazed woefully high and wide.

Even more drama! Iceland wins a penalty seconds after, but Birkir Bjarnason smashes the ball over!

Late Drama! Raheem Sterling wins the penalty and converts it to give England the lead at the death! 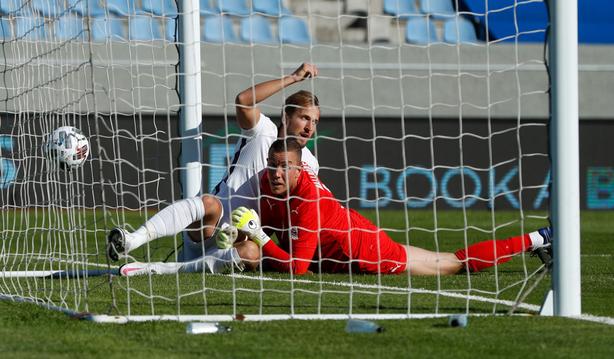 Goal Disallowed! Harry Kane turned the ball in at the far post, but the effort was wrongly chalked off for offside!

The sides are out in Reykjavík!

Not long till game time now! No Fans for Iceland, but their famous drum for the Thunderclap will be watching the contest!

Sadly, there will be no supporters today, but our amazing Tólfan will be us in spirit!#fyririsland pic.twitter.com/T4CYsV4Xfa

England have arrived, and look focused! Can the Three Lions come away with the points?

Now for Iceland! Four players in the side that stunned England at Euro 2016! Midfielder Birkir Bjarnason will be the man to watch, he plays in Serie A with Brescia! Shame we won't have any thunder clapping tonight!

Team news! Phil Foden is handed a debut for the Three Lions! Harry Kane will spearhead the attack.

Here it is: your #ThreeLions team for our first game of the year! pic.twitter.com/FmKAmco4qt

Likewise Iceland! Who will be wearing a brand new kit for the game tonight. Big fan of these logos!

Good evening! Welcome to the Live Stream for Iceland Vs England in the Nations League! Can Gareth Southgate's side come away with the win, or will Iceland who famously defeated the Three Lions at Euro 2016 come away with all three points. Join me for the build-up, team news and live video of the goals.