A decision on whether Edinson Cavani features in Paris Saint-Germain's Champions League clash with Manchester United will be made on the day of the game, according to Thomas Tuchel.

Cavani has been out of action since suffering a hip injury against Bordeaux on February 9 and the Uruguay international missed PSG's 2-0 first-leg win at Old Trafford as a result.

The striker returned to training with the club last week but was not fit enough to make the squad for Saturday's Ligue 1 win over Caen.

Tuchel confirmed that the 32-year-old trained as normal with the rest of the squad this week and a decision will be made on Wednesday as to whether he features against Ole Gunnar Solskjaer's side.

"He did the last two training sessions normally, but we will decide whether he plays tomorrow or not," Tuchel told a media conference.

Cavani has been joined on the sidelines by Brazilian superstar Neymar, who has a foot injury, leaving Mbappe as the only member of PSG's regular front three for much of the past month.

He has relished the responsibility, though, scoring the second away goal at Old Trafford and plundering both goals in the weekend win over Caen.

Tuchel is not surprised by the 20-year-old's performances, describing the France international as "one of the best strikers in the world".

"He is very dangerous for defenders because he has the speed – it is very difficult to defend against," he explained.

"His personality is extraordinary. He is hungry at every training session and in every game. He is one of the best strikers in the world."

PSG are red-hot favourites to progress to the quarter-finals given their two-goal advantage and the fact that United travel to Paris without 10 injured first-team players.

Tuchel has warned his side against complacency, though, explaining: "We have to be confident, but not too confident. Anything can happen.

"It's always possible for Manchester United to score the first goal. We must be ready to react if that's the case. We must not lose our energy and be prepared for all scenarios." 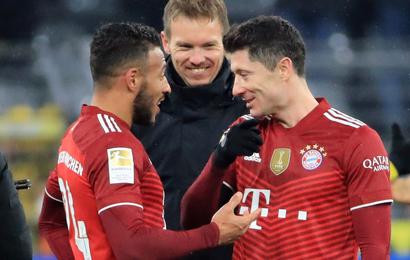