Being the most successful club in a “secondary” competition’s history is not always seen as an achievement. The very best teams do not even compete in that competition, after all, and so is it really that much of a big deal to be deemed the “best of the rest”?

On the surface, the answer might be easy. Sure, you would want to win the biggest prize there is, and ambition is often commendable. You can only beat what is in front of you, and the vast majority of clubs would love to be in a position to lift a major trophy.

In 2016, Sevilla made history by winning the Europa League for the third consecutive year, having already become only the second team to have successfully defended the title the previous season (Real Madrid had achieved the same feat in 1985 and 1986 when it was still known as the UEFA Cup).

With another defence in 2006 and 2007, they are clear at the top of the list of clubs who have won the competition (Liverpool, Juventus, and Inter Milan have won 3 and lost 1 of their four Final appearances).

Unai Emery was head coach of Sevilla during this period where they dominated the Europa League, having taken over in January 2013 after the dismissal of Michel, who had guided the side to 9 defeats in the league by January.

Emery himself had been released from his position at Spartak Moscow after a string of poor results, but his previous work at Valencia, where he managed to take the club into Europe despite financial issues, convinced the board at the Ramón Sánchez Pizjuán to appoint the former Real Sociedad midfielder as their new manager.

Emery inherited a side that was languishing in the bottom half of the table, but in Alvaro Negredo he had a reliable goalscorer, and Emery was also able to coax the best out of Spanish winger Jesus Navas and fully harness the talents of Croatian midfielder Ivan Rakitic.

Taking them to ninth by the end of the season, Emery and Sevilla nevertheless qualified for European competition, by virtue of being in the Copa Del Rey semi-finals.

With the two finalists - Real Madrid and Atletico Madrid - having already qualified for the Champions League, the Europa League qualification spots trickled down to the fifth, sixth and seventh-placed sides in La Liga.

Malaga in sixth, however, had been banned from European competition for financial irregularities, and so Ray Vallecano below them stood to benefit, only for Los Vallecanos to also be barred from entering continental competitions due to different financial problems.

It fell, then, to Sevilla, beneficiaries of the misfortune and mismanagement of those above them, and their European journey would begin.

Sevilla lost Negredo and Navas to Manchester City, replacing them with Kevin Gameiro and Carlos Bacca. They would go on to finish fifth in the La Liga and charge to the Europa League Final in Turin against Benfica who had knocked Juventus out at the Semi-final stage.

Sevilla had taken a largely Iberian path to the Final, knocking out Estoril, Real Betis, Valencia, and Porto along the way before beating Benfica on penalties, Gameiro and Bacca among those who scored in the shootout.

Grzegorz Krychowiak joined Sevilla shortly after their 2014 Europa League triumph, and the Polish defensive midfielder became an integral part of Emery’s squad, alongside Aleix Vidal, who arrived from Almeria, and Ever Banega, who had sought to rejoin Emery, who was his coach at Valencia. Retaining the goal threat of Gameiro and Bacca, the Sevilla midfield was now properly reinforced, especially as they had lost their captain and talisman Rakitic to Barcelona.

Rakitic had been named man of the match in the game against Benfica and had been at the heart of everything good Sevilla and Emery had achieved thus far, but with their new signings, they again reached the Final of the Europa League, ending the fairytale run of Dnipro Dnipropetrovsk in Poland, where Krychowiak scored. 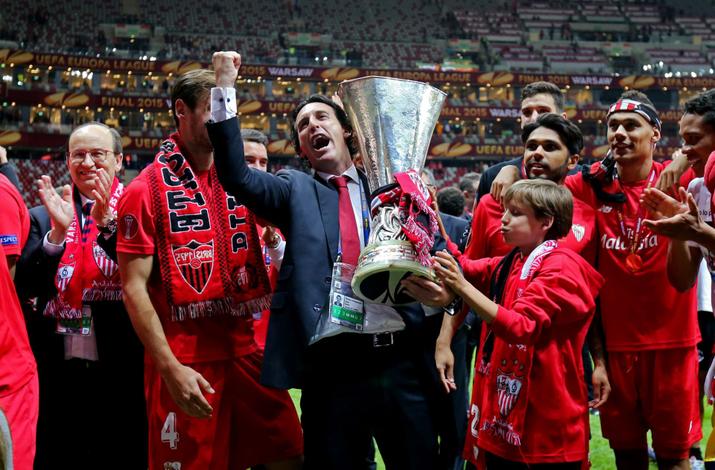 Changes in the competition structure meant that Sevilla had now qualified for the Champions League, as winners of the Europa League, but here their slow descent had begun.

Emery was unable to significantly strengthen his squad, even with the arrival of Ciro Immobile, whose time in Seville saw him score just twice. Carlos Bacca left for AC Milan, while Vidal was snapped up by Barcelona, and drawn into a veritable group of death in the Champions League (alongside Manchester City, Juventus, and Borussia Monchengladbach).

Sevilla finished a distant third and dropped back into the Europa League at the Round of 32, where they faced Ole Gunnar Solskjaer’s impressive Molde. Sevilla would win only once in the last nine league games, though they would reach the Copa Del Rey Final, only to be beaten by Barcelona.

Sevilla stood on the precipice then, with a thin and weak squad that had overachieved, they found themselves qualified for the Champions League once more, even if they did not appear to have the quality to challenge the established names there.

They were hit, then, by the departure of Emery to Paris St-Germain, their former manager also taking Krychowiak to the Parc des Princes. Banega would move to Inter, and Immobile would end his torrid spell with Sevilla to join Lazio, where he would go on to break all kinds of goalscoring records. Former captains Jose Antonio Reyes and Coke would also leave during this window.

Sevilla would find themselves grouped with Juventus once more in the Champions League, but managed to pip Lyon to second place, hanging on Matchday six to qualify with a goalless draw. Now in the knockout stage, though, Sevilla had lost their means into entering the Europa League, the competition that had brought them so much joy over the years.

They were drawn against Leicester City, fresh off of their miraculous Premier League title win, and while Sevilla won the first leg 2-1, new coach Jorge Sampaoli could not see the tie out, and they were overturned 2-0 at the King Power Stadium, and the five-time Europa League winners, the side that had won the previous three finals, were out of Europe entirely. By then they had already been eliminated from the Copa Del Rey as well, 6-3 losers to Real Madrid at the Round of 16. 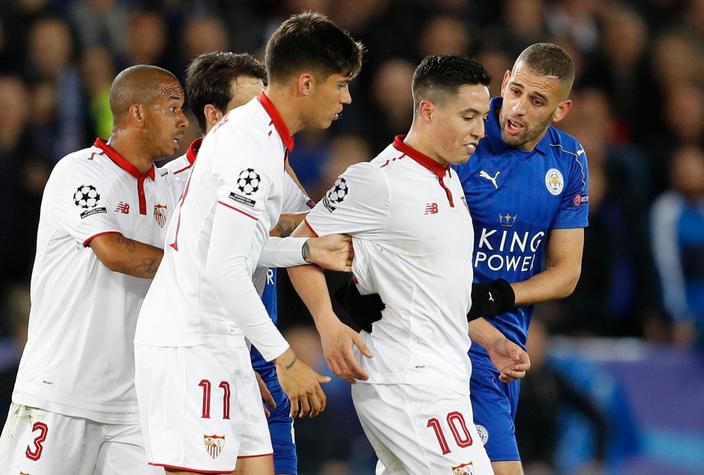 Sampoli left to manage Argentina, and Sevilla entered 2017/18 with Eduardo Berizzo at the helm. Ever Banega and Jesus Navas returned, but the side’s league form was erratic and they could only manage a seventh-place finish, losing 14 games, including heavy defeats against Eibar, Celta Vigo, and Real Madrid. They would also be beaten 5-0 by Barcelona in the Copa Del Rey Final, a game remembered more for featuring Andres Iniesta’s last goal for the Catalans.

In Europe, Sevilla would struggle to get out of a relatively straightforward group, and while they did go on to knock out a very poor Manchester United side, they were then immediately outclassed by Bayern Munich and eliminated and would finish the season having gone through three managers, Berizzo replaced by Vincenzo Montella who would then see Joaquín Caparrós take over.

Caretaker manager Caparrós was then succeeded by Pablo Machín, who had guided Girona to La Liga from the lower divisions. As before, a familiar face in Aleix Vidal returned after an unsuccessful spell at a larger club, but they also lost key players in Stephen N’Zonzi and Clement Lenglet, while peppering their side with players who had enjoyed at best mediocre seasons for other teams.

Machín led Sevilla to a dismal run of 6 defeats in 8 league games from January to March, the entire stretch capped off by the Europa League record-breakers being knocked out of Europe by Slavia Prague courtesy of a 119th-minute Simon Kjaer own goal. Following the elimination, Caparrós would take over as caretaker once more, seeing Sevilla to sixth in the league. 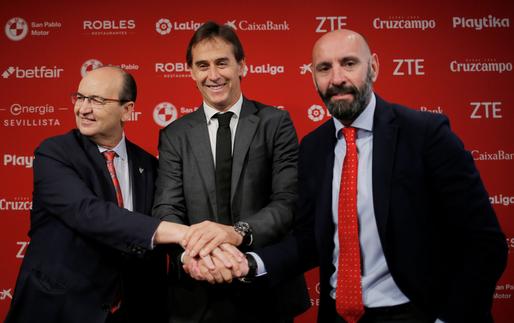 Now under the guidance of Julen Lopetegui, himself having a disastrous record with big jobs, Sevilla saw a massive influx of new players ahead of the 2019/20 season, with Rony Lopes, Lucas Ocampos, Oliver Torres and Suso among the new faces.

In total they would sign ten players in deals costing at least €10M, while also seeing a long list of outgoing players as Sevilla braced themselves for a massive overhaul. Already knocked out of the Copa Del Rey by second division side CD Mirandes (who had just been promoted from the third division), their season has, like most others, been disrupted by the current global pandemic.

What is clear, though, is that Sevilla has come a long way since their Europa League “three-peat”, and almost everyone involved in that achievement has suffered since (Ivan Rakitic perhaps the only one who has truly moved on).

Emery was sacked twice, first in Paris and then in London at Arsenal, while many of the players like Krychowiak have seen their own careers stall and stagnate.

The Seville side currently sit third in La Liga, but are a long way away from challenging the top two, while Real Sociedad, Getafe, and Atletico Madrid are threatening to unseat them.

Scraping past CFR Cluj in the Europa League Round of 32, they have been drawn against Roma, a tough test for a much-changed side that seems always on the brink of turmoil and transition since the heady days of 2016.

They have fallen, and gotten up, and fallen again, and seem a shadow of the side that captured the imagination of Europe not so long ago. It will be difficult to see if they can truly recapture that magic, or if the recent seasons of unrest and upheaval have left the European record-breakers in a downward spiral.

Next Coronavirus: Finishing the Champions League is imp
Read