Mistakes from Sokratis and David Luiz saw Arsenal squander a two-goal lead as Watford earned a 2-2 draw in Quique Sanchez Flores' first game back in charge at Vicarage Road.

Pierre-Emerick Aubameyang's deadly finishing, in the absence of the injured Alexandre Lacazette, looked to have steered Arsenal to victory after the Gabon international netted twice in 11 first-half minutes to take his tally to five in five Premier League games this season.

Unai Emery's men took the lead when Will Hughes was bundled off the ball and Aubameyang finished off a fast break with a cool finish, and the second arrived soon after courtesy of an astute Mesut Ozil throughball.

But Arsenal came under heavy pressure in the opening stages of both halves of an entertaining encounter and Watford pulled one back after a calamitous pass from Sokratis allowed Tom Cleverley a chance that he buried with aplomb.

Arsenal, who came from behind to draw 2-2 with Tottenham in their last outing, are now winless in three Premier League games, while Sanchez Flores doubled Watford's points tally for the season by guiding them to a draw.

Goal! David Luiz trips up Roberto Pereyra, the substitute steps up and strokes home the spot-kick. Watford is level, Arsenal are in danger of throwing this away!

Chance! Gerard Deulofeu flashes a shot just wide! The home side is piling on the pressure!

Goal! A disastrous defensive error from Sokratis hands Tom Cleverly with an easy chance to half the deficit! 2-1!

Half-time! Two goals in eleven minutes from Aubameyang gives the Gunners a 2-0 lead heading into the break!

Goal! Arsenal quickly double their lead! Maitland-Niles drills the ball across the box and Pierre-Emerick Aubameyang taps home! All too easy for the Gunners!

Chance! Cleverly takes aim from distance! Leno is equal to it!

Peep! Arsenal get us underway!

Watford are rock bottom of the Premier League, can the Hornets pull off an upset tonight?

0 - Watford are one of two Premier League teams yet to win in 2019-20, along with Wolves; the Hornets haven’t failed to win any of their opening five league matches of a season since 2011-12 in the Championship. Dwellers. pic.twitter.com/RkHlhANK8T

We are 15 minutes away! Final preparations for both sides underway!

Guess who's back, back again? Quique Sánchez Flores is back, tell a friend! Yes, Watford fans! He's back (looking a bit like Phil Brown) 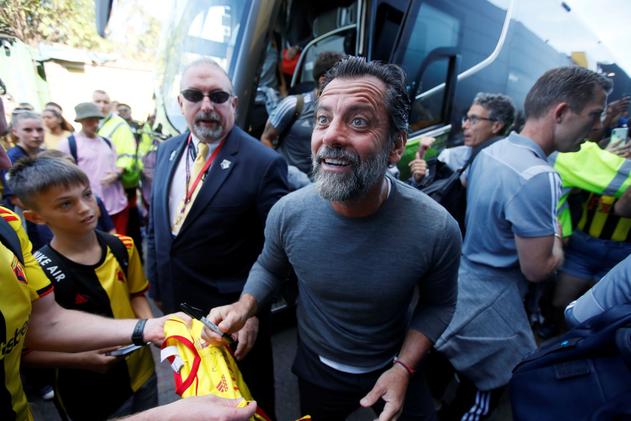 Team news! First up Watford! Three changes to the side that drew with Newcastle before the international break! Holebas, Capoue and Deulofeu all come into the side! Andre Grey will lead the line in a 4-2-3-1 formation!

3⃣ changes from the Newcastle game.

Today will be especially poignant for Watford fans.

Happy Birthday to the great man, who would have been 75 today.

Always in our hearts 💛 pic.twitter.com/IMQyFeGW8f

Do you know what I hate? Wasted talent. Arsene Wenger has had his say on Daniel Sturridge.

"I always found Daniel Sturridge as a fantastic talent, and a waste overall with his career. I expected him to have a much bigger career. He was pure class."

Arsenal scored this cheeky goal the last time the two sides met at Vicarage Road! More of the same today?

Hello! Here we go! The final Premier League game of matchday five! Who will come out on top?

Good afternoon! Welcome to the Live Updates of Watford Vs Arsenal. Can the Hornets get the win on the return of Quique Sánchez Flores in the side, or will the Spanish coach be foiled by compatriot Unai Emery? As ever, join me for all the build-up, team news and goals as they go in!