Tottenham left Maurizio Sarri's unbeaten record as Chelsea boss in tatters as they stormed to a 3-1 derby win at Wembley.

Dele Alli's sixth goal in this fixture got Spurs off to a flyer and Harry Kane made it 2-0 in the 16th minute.

Son Heung-min was a menace to a ramshackle Chelsea defence throughout and brought up his 50th goal in Tottenham colours with a sublime 54th-minute solo effort.

Spurs swarmed all over Chelsea from kick-off and had their reward in the eighth minute when Alli headed Christian Eriksen's delightful free-kick beyond Kepa Arrizabalaga.

Son then blazed over and Kepa produced a superb save to deny the South Korea international.

The world's most expensive goalkeeper will look back at events from the 16th minute less favourably as David Luiz squirmed out of the way of Kane's speculative drive and Kepa remained static as the ball zipped past him.

In between the goals, Spurs defender Juan Foyth was fortunate not to be punished for clumsily challenging Eden Hazard in the area.

Willian had a strike deflected over as Chelsea showed signs of life early in the second period, only for Son to bring the house down.

The effervescent Tottenham forward had plenty to do when Alli fed the ball to him down the right flank, but he comfortably outstripped Jorginho and was barely troubled by David Luiz's ineffectual presence on his way to arrowing a crisp finish into the bottom corner.

Kane and Alli should have added further goals before substitute Giroud found scant consolation for a well-beaten Chelsea.

Peep! All over here! Tottenham comprehensively beat Chelsea 3-1. That's the Blues unbeaten record all over! Match Report up in a minute!

90+1 A late chance for Chelsea, Barkley knocks it back to Alonso who smashes the ball over!

90- We have four minutes of stoppage time.

87- Chance! Pedro latches onto a cross from Barkley, which fizzes over.

84- Goal! Chelsea pull on back with a textbook Giroud header. That's his first Premier League goal of the season. Game on? Unlikely.

83- Foyth has been impressive today, especially at just 20-years old. The central defender hoofs it away, cheers ahoy!

80 - It hasn't been Chelsea's day today. They've been second best to everything.

79- Eden Hazard is down. Look away Chelsea fans...

77- Sub for Spurs! Son is off, his solo goal will live long in the memory. Erik Lamela is on.

75- Final sub for Chelsea - Willain is off for Olivier Giroud. The former Arsenal man is greeted with boos from the Spurs faithful.

70- Jorgenho & Alli continue their duel. This time the Chelsea midfielder picks up a yellow for a nasty challange on Alli.

67- Chance! It should have been 4-0! Sissoko drills the ball into the box and Harry Kane smashes the ball over from five yards out. A sensational miss.

58- Dele Alli and Jorginho have a "disagreement" it comes to nothing!

57- Double sub for Chelsea. Morata & Kovacic off, Pedro and Barkley are on.

54- Goal! What a finish from Son! On the breakaway, the South Korean outpaces Jorginho, beats David Luiz before slotting it into the bottom corner! What a solo effort! Game over!

50 - Chance! Alonso at the back post with a header, Kovacic latches onto the loose ball and promptly smashes it over the bar.

48- Willain clips a ball towards Morata, not for the first time he's flagged offside.

47 - Luiz charges forward and promptly loses the ball after beating four players. Sarri ball this is not.

46- David Luiz picks out Willian with a delicious long ball. It's just a tad too long for the striker and the ball skips out of play.

45- Peep! Chelsea get us back underway!

45- Peep! My oh my! What a half of football from Tottenham. Chelsea has been all over the place! It promises to be a fascinating second half. Stick around! See you in 15!

44- Second Penalty shout for Chelsea? Hazard tumbles under pressure from Sissoko. Nothing from the referee.

43- Kante launches a cross towards Morata, Hugo Loris is quick off his line to gather the ball.

40 - Chelsea has seen more of the ball in the last ten minutes. The trouble is that they haven't really created much with it. Spurs, on the other hand, have been sensational on the counter.

36 - Chance! An effort all of Eden Hazard's doing. The Belgian picks up the ball on the half-way line holds off two Spurs defenders and smashes a shot towards goal. Loris does well to palm it away.

36- Son picks out Kane with a through ball. The cross come shot scampers wide.

35- Tottenham's intensity has unsettled Chelsea from the very start. Son, in particular, has been fantastic on the breakaway.

32 - Sissoko snaps into a challenge and floors Kovacic. Big cheers from the Spurs faithful. They are fired up for this.

29 - Chance! Eriksen knocks in a cross to the near post Alderweireld's header is well saved by Kepa, but the ball falls to Foyth who produces a scorpion kick which is inches wide. It could have been 3-0!

24- Chelsea has settled, and are starting to see a little more of the ball. Morata draws a good save from Loris, but the Spanish striker is flagged offside.

22- David Luiz is down after clashing with Dele Alli. Might be for the best if the Brazillian defender gets subbed off based on the first 20 or so minutes.

18- Sarri is barking orders on the sideline, what has happened to the Chelsea backline? They seem all at sea! Rudiger picks up a yellow for hauling Kane down just outside of the penalty area on the right-hand side.

16- Goal! 2-0 Spurs! Harry Kane lets rip from distance and Kepa is bamboozled, thanks in part to David Luiz being in the way. Still, Spurs are 2-0 up and Chelsea's unbeaten start is in real danger here.

14- Penalty for Chelsea?!  Foyth with a clumsy challenge on Hazard. The referee waves away the claims.

12- Kepa! Save! A lovely stop to deny Son. Spurs breaking at will on Chelsea at the minute. Breathless stuff!

10- Chance! Eriksen plays in Son with a clipped ball, the South Korean blazes the ball over the bar, Sarri is livid on the sidelines. What has happened to Chelsea ?!

8- Goal! A perfect ball from Eriksen which is nodded on by Dele Alli. Kepa flaps at it, but the ball ends up in the back of the net! What a start from Spurs!

5- Spurs are bustling full of confidence here. An early goal would do them the world of good.

3- Chance! Aurier knocks in a cross towards Harry Kane, Azpilicueta gets a vital touch on the header and Kepa gathers the ball.

2- A very positive start from Spurs, Serge Aurier is flagged offside as his shot hits the side netting.

1- Spurs win two quick-fire corners. The final one is nodded over by Dier.

Peep! Spurs get us underway!

Just over 30 minutes till Kick-off now! Our pitchside reporter Carrie Brown has a chat with Jim Beglin. Spurs are heading into a tricky run of games. Has Potch shuffled the pack enough with this team?

Reaction to the team news from Wembley with @jimbeglin & @CarrieBrownTV.

Now for Chelsea. Sarri picks the same side that started against Everton last time out. No changes.

We have team news! First up Spurs! Four changes from the side that defeated Crystal Palace. Serge Aurier, Eric Dier, Christian Eriksen and Son Heung-min are all in. Good news, Jan Vertongen is on the bench after recovering from a hamstring injury.

Just over an hour till game time! It seems like most of you are backing Chelsea to come away with the win!

Not long till the Blues take on @SpursOfficial at Wembley for a well-anticipated London Derby!

It's half-time in the 18:00 games. Man City are cruising against West Ham, Fulham came from a goal down to lead 2-1 against fellow strugglers Southampton, and Brighton is leading against the ten men of Leicester. James Maddison has been sent off for the Foxes. 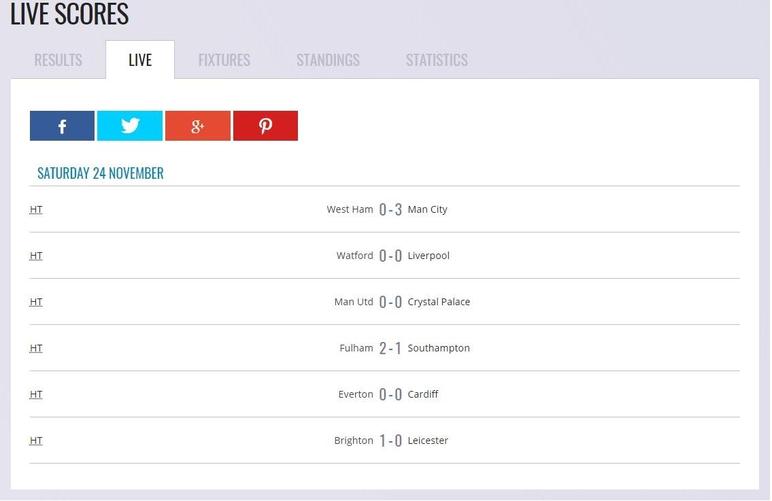 It's a big match tonight at Wembley, this video is very much a scene setter for you to enjoy.

Good evening! Welcome to the Live Updates of Tottenham Vs Chelsea. It's a London derby under the lights at Wembley, in what arguably is the game of the weekend. Spurs are just a point behind Chelsea in the league, and a victory for Mauricio Pochettino's side would be a real statement of intent. As for Chelsea, they have yet to taste defeat in the league this season and will not be looking to lose further ground on Man City & Liverpool at the top of the table. So stick around for all the latest team news, build up and anything else that happens to pop up in the next few hours.