Manchester City faces off against Manchester United on Saturday evening, knowing that any further dropped points, could end any hopes of winning a third straight Premier League crown. Liverpool has opened up an eleven point gap on the Citizens, and Pep Guardiola will be well aware that perfection will be needed if his side is to claw back the points deficit.

Last time out, City registered a commanding 4-1 win away to Burnley in a game which could have been problematic for Pep’s side. Three second-half strikes from Gabriel Jesus, Rodri and Riyad Mahrez turned the contest in favour of the Citizens.

In team news, City will be without the services of Sergio Aguero who has missed the last three games with a thigh complaint. On a more positive note, German midfielder IIkay Gundogan will be back in the fold, after serving a suspension against Burnley. It remains to be seen if defender Oleksandr Zinchenko will be back in contention after training in recent weeks after knee surgery. 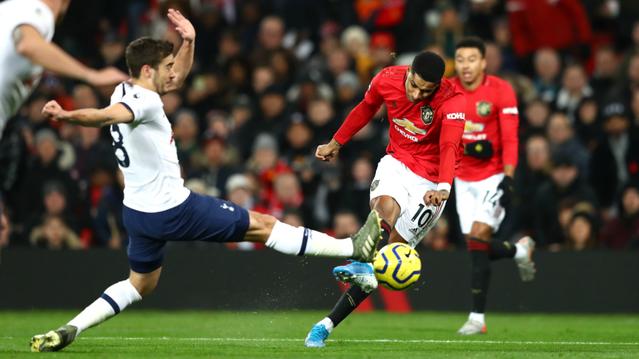 As for Manchester United, they relieved the pressure on boss Ole Gunnar Solskjær following a hard-earned 2-1 win over Jose Mourinho’s side midweek. A goal in either half from Marcus Rashford handed the Red Devils all three points and their first win in four games in all competitions.

The victory pushed United into sixth place and eight points away from the top four. Considering how well United have done against the top four sides this season, hopes remain that Solskjær could turn things around. However, with the spectre of Maurico Pochettio looming large, the Norwegian coach will be well aware that he needs a run of victories to keep him in the job.

In team news, Paul Pogba is contention to return to the first team lineup after recovering from an ankle injury. Nemanja Matic could also force his way into the squad after missing out against Spurs. Marcos Rojo has missed out on the last three games, and may also play a part after recovering from a muscle injury. Antony Martial is unlikely to take part after picking up an injury against Aston Villa.

It certainly promises to be a fascinating contest as Manchester City take on Manchester United. Follow all of the action via beIN CONNECT.