A bold break from AG2R-La Mondiale rider Gougeard paid off on stage 19 as he demonstrated outstanding endurance to claim victory in the 185.8 kilometre stage from Medina del Campo to Avila on Friday.

Gougeard had long since raised his arms aloft to celebrate an impressive victory by the time Giant-Alpecin's Dumoulin moved away from Aru (Astana) on the cobbled climb to double his advantage with only two stages remaining.

Aru had made two visits to the race doctor's car after crashing in the peloton, with Dumoulin held up as a result of that incident .

As Gougeard was surging away on his own, a separate race was unfolding behind in what prove to be a decisive stage with so little to choose between Dumoulin and Aru.

It proved to be the Dutchman who would strike another blow in the battle for the red jersey, taking advantage of great support from John Degenkolb and Lawson Craddock to put some more light between himself and Aru.

Alejandro Valverde had made aggressive moves before being caught at the foot of the final climb, as the Giant-Alpecin riders worked well to set things up nicely for Dumoulin.

Gougeard had shot away on his own in impressive fashion to claim an emphatic solo win, leading by 27 seconds as he entered the final kilometre as he never looked like being caught.

Dumoulin will attempt to all-but finish off the job on the 175.8km stage 20 from San Lorenzo de El Escorial to Cercedilla on Saturday.

Yates in red after stage 14 surge 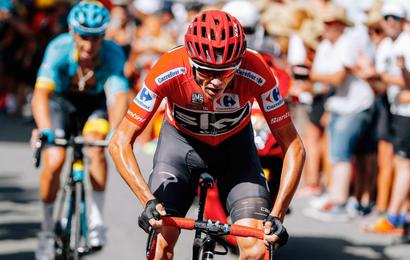