A spectacular goal from Gustavo Scarpa saw Palmeiras edge Gremio 1-0 in the first leg of their Copa Libertadores quarter-final on Tuesday.

Scarpa produced a tremendous 30-yard strike to give Palmeiras an away win in Porto Alegre, where Felipe Melo was sent off in the second half for the visitors.

Still, the moment of brilliance from Scarpa was enough for Luiz Felipe Scolari's men to take an advantage into the return leg.

Scarpa drilled a left-footed rocket past Gremio goalkeeper Paulo Victor and in via the underside of the crossbar in the 31st minute.

Both teams had their chances in the second half, with Dudu twice going close for Palmeiras, including hitting the outside of the post.

Former Juventus midfielder Melo was shown a second yellow card in the 77th minute, the 36-year-old reduced to tears after being sent off.

However, Palmeiras sat deep in the closing stages, holding out Gremio to secure their victory.

Next Copa Libertadores Review: Boca close in on semi-fi
Read

Boca's appeal thrown out by CAS

Jesus lays down gauntlet to Liverpool 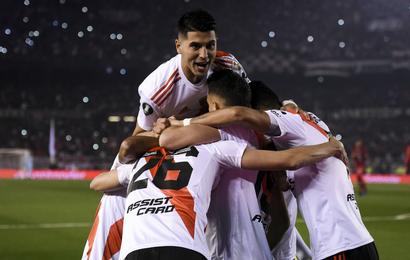