Jurgen Klopp was left feeling "sad" because he felt Liverpool's attacking players did not offer enough in their penalty shoot-out defeat to Arsenal in the Community Shield.

Pierre-Emerick Aubameyang gave Arsenal an early lead with a fine strike but Liverpool, who attempted to dictate proceedings, levelled 17 minutes from time through Takumi Minamino.

The game went to penalties and Aubameyang netted the decisive kick after Rhian Brewster failed to convert.

Liverpool were made to rue wastefulness in front of goal and perhaps a lack of sharpness in attack, with Sadio Mane, Roberto Firmino and Mohamed Salah all unusually subdued, and their issues in the final third did not go down well with Klopp.

He told BT Sport: "Today I was sad. When you play against a formation like this – which happened to us pretty much always, not only when we are 1-0 down, even when it's 0-0 a lot of teams play like this – then you need to be in the final third really fresh.

"You want to force it sometimes, create angles, create crosses, passing in behind, all this kind of stuff. The rhythm for that fell a little bit.

"We couldn't create exactly the chance we wanted but we had two of them and the third one that we scored with. Against a team with the quality of Arsenal, on some days it must be enough.

Klopp was adamant Arsenal hardly threatened after taking the lead, adding: "I think they had exactly two shots at goal and one situation that was similar.

"After a long diagonal ball, we left Neco [Williams] alone and Auba could come inside to finish it off. The the other moment Ali [Alisson] made a save. That was it, pretty much," he said.

"Apart from that we had to play against a low block with an incredible counter-attacking threat. In these games you need then the final touch.

"In the end we created enough moments but we should have created more. We had the ball a lot but had to play around.

"We had a few good moments, Sadio had chances, we deserved the equaliser for sure and then could have scored more.

"We didn't do that and have to take it. A penalty shoot-out can always be a bit of a lottery. We were unlucky there and congratulations to Arsenal. We respect the competition." 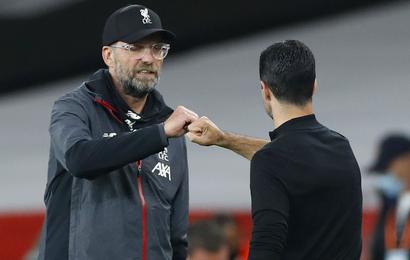