Friday evening will see Algeria step out at Cairo International Stadium, just ninety minutes away from glory. The North African side have put in an inspired campaign, playing a brand of attacking football pleasing to the eye, and not to mention of magic from Riyad Mahrez to seal their place in only a second-ever Cup of Nations Final.

Key to the rise of Les Verts has been their boss Djamel Belmadi who enjoyed a successful stint in Doha before getting the Algerian job in August 2018. Having kick-started the winning ways of Al Duhail, to the disappointment of the 2015 Asian Cup with Qatar Belmadi cut his managerial teeth in the Gulf country and it’s perhaps worth looking at his time in Qatar for an indication of how he may progress with Algeria ahead of their biggest game in twenty-nine years.

Belmadi enjoyed a fleeting season in Qatar with Al Kharaitiyat two years before retiring, but his time in Doha would prove to be a catalyst to a move into management.

Having gained promotion to the Qatar Stars League, Lekhwiya (the side is now known as Duhail) turned to  Belmadi to guide them in their first-ever season in the top flight. Backed extensively by the police force of the same name, Lekhwiya spent big in order to make a dent in the league. Signing Ivorian international Bakari Koné from Qatar Sports Club proved to be the catalyst for the Red Knights, who edged out Al Gharafa to win a maiden league title.

Belmadi strengthened bringing in the likes of youngster Karim Boudiaf and Nam Tae Hee, who would both go on to play huge roles with the club. Still, success followed for the side, who went on to defend their league inspired by a core of young Qatari players and seasoned veterans lead by compatriot Madjid Bougherra.

Months later, Belmardi was handed the reigns of the Qatar national B-team for the upcoming 2013-14 WAFF championship. Having chosen a host of young players from Lekhwiya along with the newly eligible Karim Boudiaf, Qatar went on to win the tournament with a 2-0 win over Jordan thanks to a brace from Boualem Khoukhi.

The impressive display caught the eye of officials at the QFA, as Belmadi was given the national team job just two months later. Whist the 22nd Gulf Cup would prove to be the crowning glory for the Algerian’s time in the Al Annabi hot seat. It was not the greatest start to the tournament after picking up three points from three group games and only managing to score a single goal. With Belmadi often snapping at press conferences.

Still, Qatar qualified for the semi-finals and impressed with a 3-1 win over Oman. Into the final, and Qatar faced hosts Saudi Arabia, backed by partisan home support. Boualem Khoukhi would prove to be decisive yet again, scoring the winner just before the hour mark to hand the maroons only a third ever gulf title. 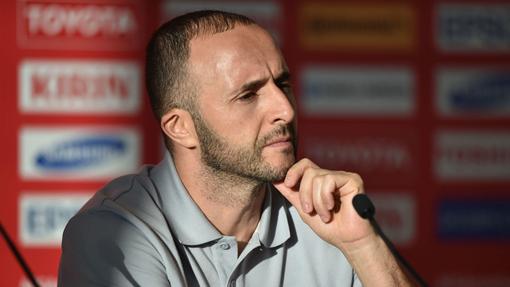 However from the highs of Saudi Arabia, came the crushing blow of the 2015 Asian Cup in Australia as Qatar lost all three group games, including a 4-1 hammering by the UAE in their opener. The writing was on the wall for Belmadi and was eventually relieved of his duties.

Still, Belmadi’s stock remained high and was tentatively linked with a move Al Arabi, however an offer to return to Duhail (renamed after the merger between Lekhwiya and El Jaish) was too good to turn down.  Three years later, and Belmadi had continued winning ways, including an unprecedented domestic treble during the 2017/18 season. Although this version of Belmadi was intense and demanding on players and media.

Quiet and focused, Belmadi had learnt from the mistakes made with the national team to continue  Duhail’s domestic dominance with a win at all costs mentality.  With so many trophies to his name, it is no wonder that his country came calling in the summer of 2018.

Belmadi has imparted a tactical discipline, and a serial will to win onto this talented group of Algerian players, transforming them from would-be challengers to favourites over the course of the tournament. Having learned his trade in Qatar, Belmadi is on the verge of making his own history with Algeria.