Having represented Iran in the 2006 FIFA World Cup and played in the region for decades, Yahya Golmohammadi knows the history and importance of global and continental football across Asia.

Speaking at a pre-match press conference at the Asian Football Confederation (AFC) Champions League this morning in Qatar, the former star and current coach of Iranian side Persepolis spoke first of his impressions of playing in stadiums earmarked for the FIFA World Cup when it comes to Qatar in 2022.

“These world-class venues are not only a credit to Qatar, but to the whole Asian continent. I hope that these efforts are duplicated across the continent as a way to promote our beautiful game,” said Golmohammadi to attending reporters. 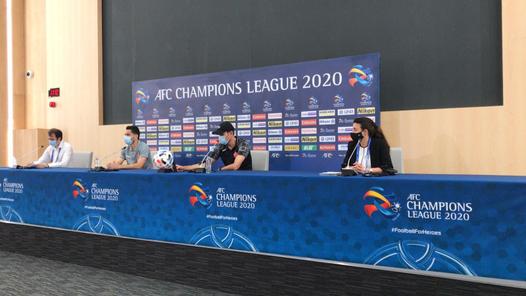 Three of the four stadiums being used in the tournament are FIFA World Cup Stadiums. They are Education City Stadium, a venue that was inaugurated in June as a tribute to frontline healthcare workers, Al Janoub Stadium, designed by world-renowned architect Zaha Hadid, and Khalifa International Stadium, Qatar’s national stadium built in 1976 and recently renovated for the FIFA World Cup Qatar 2022.

All the stadiums used are equipped with cooling technology that aims to create an optimal playing environment during September, where the average temperature in Qatar is between 32 and 38 degrees Celsius. Temperature readings have shown a consistent temperature of 22 degrees during match time, which has included several day time kick offs.

Speaking on his experience at these venues, Golmohammedi said: “As a player and now coach, I have travelled far and wide, but I have never seen or experienced such wonderful football arenas with advanced technology. It goes without saying that building this type of infrastructure is not any easy task, but if the same meticulous approach taken in Qatar is replicated elsewhere in Asia, it can be done.”

Qatar volunteered to host the remaining matches of the western region of the AFC Champions League after all Asian footballing activities were suspended in March of this year as part of precautionary measures taken to limit the spread of COVID-19.

To ensure the safety of all participants, the Local Organizing Committee, headed by the Qatar Football Association, put in a series of procedures including strict quarantine measures, regular testing and has barred fans from entry to any of the matches thus far.

Unlike the UEFA Champions League and Europa League which wrapped up their competitions in August in Portugal and Germany respectively, the AFC Champions League matches being played in Qatar are implementing a bubble to bubble methodology, where teams reside, train and play within strict isolation, whereby anyone entering these venues must either be tested for COVID-19 or remain in quarantine until the end of the tournament.

When asked about the return of Asia’s premier club competition Golmohammedi said: “No country apart from Qatar showed the required commitment to safely host a tournament of this magnitude. I would like to express my heartfelt gratitude to every single one of those involved in bringing Asian club football back to us safely.”

Yahya Golmohammadi has 74 caps for the Iran national team at the senior level and has recently taken over the management of one of Iran’s elite club sides – Persepolis.

In the 2006 FIFA World Cup, he scored once against Mexico in the group stage, having scored a crucial goal in a decisive playoff to qualify to the tournament against the Republic of Ireland.