Megan Rapinoe warmed up for Sunday's Women's World Cup final by blasting FIFA over this weekend's scheduling and the growing gender gap in prize money.

The 34-year-old will bid to claim her second World Cup winners' medal when USA face Netherlands in Lyon, on the same day the Copa America and Gold Cup finals also take place.

That has irked Rapinoe, who also took aim at FIFA over the gulf in prize money available for the women's and men's World Cups.

While FIFA president Gianni Infantino on Friday announced plans to double prize money for the 2023 Women's World Cup from $30million to $60million, the pot for the men's tournament is increasing from $400million in 2018 to $440m at Qatar 2022, meaning the disparity will actually grow by a further $10m.

"It certainly is not fair," said Rapinoe.

"We should double [the women's prize money] now and then use that number to double it or quadruple it for the next time. That's what I mean when I talk about, 'Do we feel respected'.

"A quote came out that I said, 'FIFA doesn't care about the women's game'. That's what I mean. If you really care about each game in the same way, are you letting the gap grow?

"I'm not saying the prize money is $450million [for the women] this time or next time around. [I] understand that, for a lot of different reasons, the men's game financially is far advanced than the women's game.

"[But] If we really care about letting the gap grow, are you scheduling three finals on the same day? No, you're not. Are you letting federations have their teams play two games in the four years between each tournament? No, you're not. That's what I mean about the level of care.

"We need attention and detail and the best minds that we can possibly have in the women's game helping it grow every single day. It's a very complex problem, complex thing to be a part of.

"But the resources are there, and I think the willingness and the brain power is all there – people wanting to work in the women's game and make it as good as it can. It's all there, it's just a matter of wanting to do it and caring enough about it to make it happen.

"We're making a World Cup in Qatar happen, that shows you the amount of care they have about the men's World Cup, considering all of the issues that are happening there."

Rapinoe, like many of her American team-mates, has used her platform to speak out about inequality in numerous areas of society, and once again reiterated she has no plans to attend the White House should Jill Ellis' team retain their trophy.

She is also annoyed that the Women's World Cup final will be one of three showpiece events happening on Sunday.

The World Cup date had been in the calendar since September 2017, long before CONCACAF revealed the date for the Gold Cup final and CONMEBOL announced plans for the Copa America showpiece.

"It's terrible scheduling for everyone," said Rapinoe, who expects to be fit to face Netherlands despite missing the semi-final win over England with a hamstring strain.

"That's a terrible idea to put everything on the same day. In every way. There's two other finals going on but this is the World Cup final, this is like cancel-everything day.

"The World Cup final is set so far in advance. It's actually unbelievable. So, no, I don't think that we feel the same level of respect, certainly that FIFA has for the men and just in general."

A FIFA spokesperson said the global governing body and the different confederations had discussed the schedule "in general to minimise any potential timing clashes".

FIFA's statement said: "The scheduling of the different events has gone through a comprehensive consultancy process that has involved all key stakeholders and taken into account different aspects of both the women’s and men’s international match calendars." 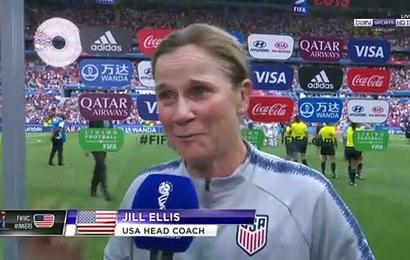