You can watch the stream of Uruguay Vs Russia Live & Exclusive on beIN SPORTS CONNECT.

Luis Suarez netted his second goal in as many World Cup games as Uruguay secured top spot in Group A with a comfortable 3-0 victory over World Cup hosts Russia, who had Igor Smolnikov sent off.

Russia's impressive progression to the last 16 has provided one of the tournament's major surprises so far, but Stanislav Cherchesov's side was brought back down to earth in a sweltering Samara.

In a fast start, Uruguay was ahead inside 10 minutes as Suarez, who scored the winner against Saudi Arabia on matchday two, found the net with a pinpoint free-kick.

Denis Cheryshev's own goal compounded Russia's misery 13 minutes later, with Smolnikov's dismissal – a second yellow card issued for a foul on Edinson Cavani prior to halftime - all but ending hopes of a comeback.

Russia showed greater solidity after the interval, with Artem Dzyuba wasting a chance for a consolation, but the damage was already done by the time Cavani got his first goal of the tournament in the 90th minute.

Portugal and Spain - who face Iran and already eliminated Morocco respectively later on Monday - are likely to await these sides in the knockout stages, with Uruguay's victory meaning they will face the side who finish second in Group B.

90- Peep! Uruguay top group A. Suarez, Cavani and a Denis Cheryshev own goal seals it for the South American side. Match Report to follow!

90- Goal! Game over, Cavani pounces on a loose ball from the corner, a lovely finish! 3-0!

89-Rodríguez cracks one from distance again. Corner for Uruguay

84- Chance for Smolov who beats two defenders is attempted cross is mopped up by Muslera.

83- Corner is floated in, Caceres really should of connected with that!

82- Rodríguez cracks one from distance. Akinfeev palms it away. Corner. Kudryashov is clattered in the process.

81- That was a chance for a goal! Cavani and Suarez link up, and the Barca man passes to the PSG striker is just a little too long.

80- Uruguay have been on easy street for some time. Getting a testimonial vibe in the final ten minutes.

77- Torreira is crunched by Kuzyaev. He'll be okay to carry on.

73-Muslera mis-hits a clearance. The ball falls to Dzyuba, but the Russian striker smashes the shot wide. That was not  very good.

72- Cristian Rodríguez is coming on, he replaces Nández who has gone through plenty of work in midfield.

71- The home crowd are in full voice... Plenty of flags being waved

68- Cavani scampers across the Russian box with intent, his shot skips wayward.

64- One of the Ignashevich brothers (I'm not sure which one) smashes into Cavani in the box. No penalty.

59- Russian sub- Miranchuk who has been very quiet is replaced by Fyodor Smolov that was the final chance for the hosts.

50- Very tame stuff this. We all know that Uruguay is going to win this.

Peep! 2-0 Uruguay look like they are topping Group A. Luis Suarez with a magical free-kick and Cheryshev with the own goal. Whilst  Smolnikov has been sent off. Join me for more fun in 15 minutes!

42- Uruguay look like they are having a lovely time knocking the ball around.

37- Russian change Fernandes is on at right back, Cheryshev is sacrificed (not literally)

35- Sending off! Smolnikov is sent off for a second yellow for a rash tackle on Diego Laxalt.

33- It's a deceptively open game. Russia just needs a goal before the break. Incidentally, Uruguay has never surrendered a two-goal margin in a World Cup. One for the fact fans.

28- Kudryashov digs out a cross from the left. Uruguay get rid.

27-Diego Laxalt has been fully credited with the goal. One for a dubious goals panel.

22-Uruguay go 2-0 up! Laxalt cracks a shot from outside the box, it rebounds of Cheryshev and finds the back of the net!

16- Russia sharing some more daring. Cheryshev's dangerous looking cross is cleared for a corner. The inswinger from Cheryshev is headed  over by Dzyuba from close ranger

12- Dangerous Corner for Russia. Muslera grabs it with ease.

9- GOAL! What a beauty from Luis Suarez! Drilling it low straight into the bottom corner! Akinfeev had no chance! 1-0

8- Dangerous Free-kick! Bentancur is hacked down just outside the box. Yellow card for Gazinsky. Suarez territory that...

3- It's been a quiet start on the pitch. Fantastically rowdy off it.

1-Matías Vecino has a crack from distance, the shot skips wide of the Russian goal.

Peep! Russia get us underway! They are playing in a fetching all white number.

Team News! Four Changes for Uruguay today, Sebastian Coates, Nahitan Nandez, Diego Laxalt and Lucas Torreira all start. It's a landmark day for La Celeste keeper Fernando Muslera who gets his 100th Cap for his country. As for Russia, three changes to the side Igor Smolnikov  Fedor Kudryashov and Aleksey Miranchuk start.

We have our first set of teams confirmed!

Hello! Welcome to the Live updates for Uruguay Vs Russia! Both sides have perfect records in Group A so far so something has to give in Samara. A victory for either side will see them top the group, whilst a draw will see Russia top the standings. Join me for all the Live Video Updates of the goals as they go in!

Uruguay will be looking to make it three wins from three in their group games but will have a tough test against surprise package Russia who have impressed so far.

La Celeste has put in two workmen like performances against Egypt & Saudi Arabia to come away with vital 1-0 victories. Luis Suarez’s first-half strike was the difference maker against Saudi, and the Barcelona star is expected to start again, as Uruguay only need a point to top Group A.

Central to Uruguay’s form at the World Cup has been the defensive pairing of Jose Gimenez and Diego Godin. The Atletico Madrid duo has a good understanding, and will confident of shutting out a lively Russian attack, which has scored eight goals so far in the tournament. 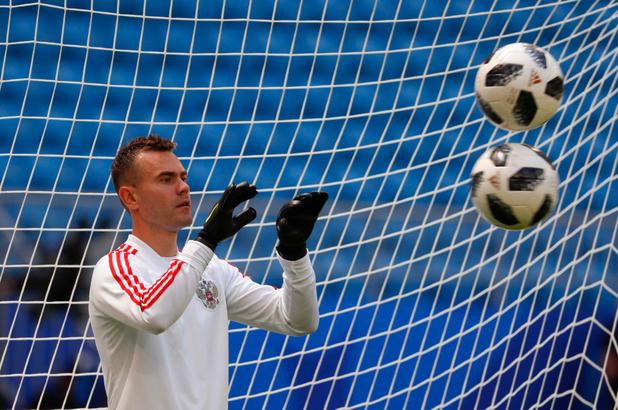 Russia will be buoyed after their two wins sealed their progression to the round of sixteen. Many people didn’t expect the hosts to make it out of the group, however, the lowest ranked side in the competition bucked the odds with impressive victories over Saudi Arabia and Egypt.

The hosts just need a point to finish top of the Group where they could meet either Spain or Portugal in the round of sixteen. Denis Cheryshev has been one of the stand out players in the side, grabbing a brace in the opener against Saudi and scoring the second in the 3-1 victory over Egypt. The Villarreal midfielder came on as a substitute for the first game, and his kept his place in the squad ever since. Striker Artem Dzyuba proved to be a handful against Saudi Arabia and is likely to play some role in the game on Monday evening. The big striker will certainly be relishing the challenge against Gimenez & Godin and expect him to be a threat from set pieces.

Uruguay takes on Russia for the chance to finish top of the group. Watch the Live & Exclusive stream of the game on MAX HD3 & beIN SPORTS CONNECT.

Bayern held at home to Frankfurt