Ahmed Musa struck twice to become the first Nigerian to score at two World Cups Friday as the Super Eagles secured a crucial 2-0 win over Iceland, who missed a penalty.

The African side will secure a spot in the knockout stage if they beat Argentina on Tuesday in Group D's final round of fixtures.

A draw would be enough to eliminate the Argentines but would leave Nigeria's fate hinging on the outcome of Iceland's game against Croatia.

Musa, who came into the starting line-up in place of Alex Iwobi, announced himself with two of the goals of the tournament so far.

Musa's sweetly struck half-volley fired Nigeria into the lead just after half-time before he added a second with 15 minutes to go to make the Group D game safe.

Iceland got a lifeline in the 82nd minute with a VAR-awarded penalty but dead-ball specialist Gylfi Sigurdsson blazed over the bar.

With Croatia heading the group on six points Nigeria knew a second defeat would mean elimination and Iceland started brightest after coach Heimir Hallgrimsson changed to a 4-4-2 from the 4-5-1 he had used in the 1-1 draw with Argentina.

Alfred Finnbogason, who scored the equaliser against Argentina as a lone striker, was joined up front by Jon Bodvarsson and the pair quickly made an impact.

Captain Aron Gunnarsson launched a long throw into the box and, after Bodvarsson had made a nuisance of himself, a push gave Iceland a free-kick just outside the area.

Gylfi Sigurdsson struck it smoothly round the wall but 19-year-old goalkeeper Francis Uzoho was able to make the save high to his right.

Nigeria, with captain John Obi Mikel sitting deeper in midfield than against Croatia, slowly worked their way into the game with Victor Moses a constant threat on the right flank.

The pace inevitably dropped with the temperature still a stifling 31 Celsius at the 6:00 pm (1500 GMT) local time kickoff.

The match became a stalemate until 10 minutes before half-time when Iceland came close to opening the scoring but Leon Balogun's glancing header just did enough to thwart Gylfi Sigurdsson and Birkir Bjarnason lurking at the back post.

And on the stroke of half-time Finnbogason came within a whisker of doubling his World Cup tally when he flashed wide Gylfi Sigurdsson's whipped in free-kick.

Gerhot Rohr brought on wing back Tyronne Ebuehi for Bryan Idowu at the start of the second half and Nigeria came out full of running.

The tireless Moses was released down the right and his cross was met by Musa who teed up the ball deftly with the outside of his right foot before unleashing an unstoppable half-volley into the roof of the net.

As he wheeled away in celebration his knee caught Ragnar Sigurdsson in the back of the head and the Iceland defender needed treatment, a bandage and a change of shirt after sustaining a nasty cut.

Wilfred Ndidi forced Hannes Halldorsson into a fine fingertip save with a wickedly dipping shot from distance in the 58th minute.

Musa made the game safe with his second, controlling a long ball without breaking stride and beating Kari Arnason before rounding Halldorsson and powering his shot past two covering defenders on the line.

The Super Eagles of Nigeria take on Iceland in Volgograd. Join me for all of the Live Updates and video highlights from the big game!

Nigeria will be looking to get a win in their second Group D game against Iceland, but Super Eagles will know that they will have a tough test against debutants Iceland who showed plenty of fighting spirit in their 1-1 draw with Argentina.

Nigeria looked poor defensively in their 2-0 defeat to Croatia. Gernot Rohr will be hoping that his youthful squad has learnt from their opener, and taken those lessons into the game against Iceland a side who are similarly defensively robust.

Alex Iwobi will be hoping to start again on the wing, and his trickery will be a needed if Nigeria is to break down the Iceland defence. The Arsenal man relishes representing his country and would certainly become a national hero overnight if he can influence the tie in favour of the Super Eagles. 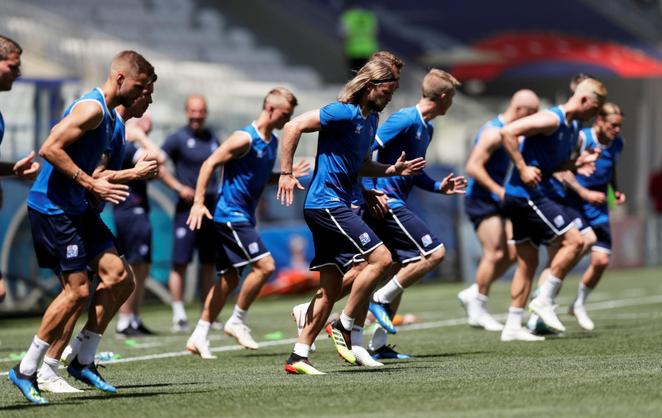 As Iceland, they showed their defensive qualities in the 1-1 draw with Argentina, successfully silencing Leo Messi. The tiny European nation did ride their luck, however, with Messi missing a second-half penalty. However, after such a disciplined performance they will fancy getting a positive result against their West African opponents.

The game against Nigeria should bring out a more attacking side from Iceland. Expect Heimir Hallgrímsson to gamble tactically if the game is a stalemate.  The more attacking outlook could see space open up for Everton playmaker Gylfi Sigurðsson. The six-time Iceland player of the year played a key role in the draw with Argentina and will be a threat from set-pieces from his side.

It promises to be an interesting tie As Nigeria take on Iceland. Watch the Live & Exclusive stream of the game on MAX HD3 & beIN SPORTS CONNECT.