You can watch the Live Stream of Brazil Vs Mexico via beIN SPORTS CONNECT.

Neymar's strike and a late second from Roberto Firmino saw a strangely low-key Brazil edge past Mexico 2-0 to book a spot in the World Cup quarter-finals.

Tite's men are yet to hit full stride at Russia 2018, and on this evidence they still have more to come, but Neymar's 51st-minute goal and Firmino's tap-in after coming off the bench means the tournament favourites progressed with relative comfort in the end,and avoided the early exit that has already befallen the likes of Spain, Germany and Argentina.

Mexico were the dominant force in the opening 20 minutes in Samara, but they were unable to make their superiority count and eventually allowed their muted opponents to scrap their way into the game.

After Mexican goalkeeper Guillermo Ochoa had been called into action to deny Gabriel Jesus and Philippe Coutinho, Neymar finally made the breakthrough at the back post - netting his second goal of the tournament shortly after half-time, when Willian's scuffed cross found its way through to him.

The margin became more comfortable with two minutes left when Firmino - just on as a replacement for Coutinho - added the finishing touch after Neymar had lead a counter-attack.

The only blemish for the five-time champions was the second-half booking for Casemiro, which rules him out of the quarter-final clash against either Belgium or Japan.

Mexico, meanwhile, will look back fondly on their opening 1-0 win over Germany, but are now left to rue a seventh consecutive exit at the last-16 stage.

90- Peep! Full time! Goals in the second half from Neymar & Firmino have sealed Brazil's progression to the quarter-finals. Mexico pushed them in the second half, but eventually, their class showed. Match report to follow!

90+5 It's looking like Mexico seventh consecutive exit from the World Cup at the round of sixteen. El Tri is consistent. In a way.

90+3 Layun with a deep cross, Thiago Silva heads away with ease.

90- Willan, who has been Brazil's best player for my money is off. Marquinhos is on, that should keep it nice and tight for the final few minutes. Andres Guardado gets a yellow for shouting at the referee... the scamp!

87- Goal! Neymar sprints away on the break, his shot to the far post catches the boot of Ochoa. Firmino is on hand for the tap in! 2-0! Game over!

84- Brazil is keeping their shape well, and force Mexico back at one stage. A deep cross is headed out by Fagner, corner for Mexico. Which is wasted.

82- Gallardo barges into Thiago Silva. After a few minutes after receiving treatment, he seems ok. Still some valuable minutes swallowed up!

80- It's all Mexico heading into the final ten minutes, they just need to make it click in the final third.

79- Paulinho is off... Fernandinho is on for Brazil!

75- Salcedo gets a yellow for a tackle on Neymar, I can imagine it's more for the challenge on the sideline minutes previous, but still.

69- Twenty or so minutes for Mexico to force extra-time! Can they do it?! In the meantime, Neymar is really critically injured on the sideline. Even the replay shows the lightest of contact on the PSG man...

67- Chance! Willian with all the running before squaring to Neymar. His drilled chance has  Ochoa scrambling, but it's wide.

64- Neymar is upended. He takes a while to get up... I fear we are going to see a few more of these before we are over today.

63- Willian cracks a shot from outside the box. Ochoa is equal to it. He's been magnificent today!

62- The Final roll of the dice for Mexico- Javier Hernandez off,  Raul Jimenez on!

60- Chance for Mexico! Vela curls a ball towards goal from outside the box! Alisson Tips the shot over.

59- Yellow for Casemiro, he'll miss the next match now!

53-  Herrea gets a yellow for tussling with Willaim

50- Goal! Neymar drives forward, backheel to Willian who drives deep into the box his shot across the box is turned in by Neymar! Goal! Brazil break the deadlock! 1-0

49- Mexico spring forward Gallardo smacks a curling shot over. This second half has started lively!

48- Fagner with a perfect ball to Coutinho. Salcedo and his bleach blonde mop heads the ball out for a corner, which comes to nothing.

47- First shot in anger... Short corner to Coutinho, sprinting into the box his shot is well saved by Ochoa.

Peep! Brazil get this party started!

Arsene Wenger has had his say in the Arabic studio about the sides who have left the World Cup... Are Brazil about to join, Germany, Spain and Portugal on their way out of Russia? We will find out in the second half!

Wenger: 🗣️ "It's a little bit the counter attacking World Cup... all the teams who take initiative unfortunately have gone home."

45- Peep! The referee blows up!  A decent first half that! Join me in 15 minutes for more soccer chat!

43- Allison launches the ball up field to Neymar. Ochoa is equal to it. Mexico pushes forward.

42- Yellow card for Filipe Luis for a rash challenge on Carlos Vela.

40- Willian drills in a cross low... Oacha gathers it... Plenty of pressure from the samba boys now.

38- Dangerous Free-kick for Brazil... Neymar smashes it over.

32- Brazil lay siege to the Mexico goal, Gabriel Jesus picks up the ball after exchanging passes with Neymar. His shot is palmed away by Ochoa and Mexico live to fight another day!

29-  Edson Álvarez one on one with Neymar. The Mexican defender puts in a beautiful challenge in the box to get the ball of the PSG man.

28- Vela has a rash shot. Not so excellent news for Juan Carlos Osorio, the Mexican boss tells everyone to "Calm Down" just like Harry Enfield did in the 90's dressed as a man from Liverpool.

26- Brazil are loitering around the Mexico area with intent, the ball eventually drops to Coutinho who smashes his shot well over the bar. Signs of intent from the South Americans.

25- Neymar pushes into the box. Leaves Álvarez for dead, Ochoa gets a glove to his shot.

23-Vela picks out Herrera at the edge of the box, the midfielder shapes to shoot but moves the ball to his over foot, Brazil bodies block the effort

20- Filipe Luís & Gabriel Jesus combine in the box, it looks dangerous, a quick pass to Neymar on the edge of the box but the PSG man is crowded out quickly.

16- Willlian wins a corner for Brazil, the outswinger is quickly cleared. Up the other end, Lozano has his shot blocked by Filipe Luís. End to end stuff!

14- Lozano flashes a ball across the box. Hernandez stretches but can't reach it.

13- Mexico has had the better of the early exchanges here. Vela, in particular, has been impressive.

10- Vela with a daisy cutter to Hernandez who speeds into the box. The striker runs out of ideas and is eventually crowded out by Brazilian defenders.

8- Great ball from Vela, the ball is headed to Hernandez, but the West Ham man is flagged offside.

7- Mexico settle on the ball for a few minutes, Vela scampers down the wing, wins a corner off Fagner.

4- First shot for Brazil, Neymar central just outside the box. Ochoa is equal to it in the Mexico goal. Some start this.

3-Álvarez leaves a little extra on Neymar, who crumbles to the floor. Free-kick Brazil.

2- Chance Guardado digs out across Alisson punches the ball out for a corner, which is wasted.

Breaking hair News... Neymar has had his hair did... sadly it seems quite normal...

Plenty of Analysis from the guys in the studio! We are 10 minutes away from kick-off!

Excellent news for us! This is the best news ever!  Juan Carlos Osorio talks to the news team ahead of their match against Brazil! Have a look at all the latest below!

Team News! For Brazil, two changes. Fagner and Filipe Luis are in for Marcelo and Danilo. As for Mexico Veteran defender, Rafael Marquez and Hugo Ayala come in, with suspended center-back Hector Moreno and Miguel Layun dropping out. Marquez is taking part in his fifth World Cup!

The teams are in for #BRAMEX! #WorldCup

Arsenal legend and former Brazil midfielder Gilberto Silva will be in the studio for today's proceedings. Just before the show, Gilberto popped into the Express to give his views on Brazil in Samara. Tite's side should show some caution against the Mexicans.

Hello! Welcome to the Live Updates of Brazil Vs Mexico from Samara! Can the Seleção progress to the quarter-final? They'll face a tricky test against a forward-thinking Mexico side, who have impressed under the stewardship Juan Carlos Osorio, who got the better of Germany in their opening group game. Also, in more pressing news what kind of haircut does Neymar have? We should find out the answers to this and MORE ofter the course of the next few hours!

Brazil takes on Mexico in Samara, with the Seleção warming to the task of winning a sixth world crown. Two 2-0 wins over Costa Rica & Serbia sealed Brazil’s progression as Group E winners. However, it won’t be an easy test against an attacking Mexico side who has impressed in the tournament thus far, including a 1-0 victory over 2014 winners Germany. You can watch the Live Stream of Brazil Vs Mexico via beIN SPORTS CONNECT.

Tite’s side put in their best performance of the tournament with the victory over Serbia scoring a goal in each half to beat the European side. Neymar certainly stepped up and showed glimmers of the footballer who is expected to take the World Cup by storm. The PSG star will have to improve again if his side is to knock out the Mexicans to progress.

Mexico is likely to aggressively press and harry Brazil, and that could leave space for Philippe Coutinho to weave his magic. The Barcelona man is likely to be used in a midfield three, and his eye for a through ball and a fierce long-distance shot will be needed if Brazil is to make the breakthrough in Samara. 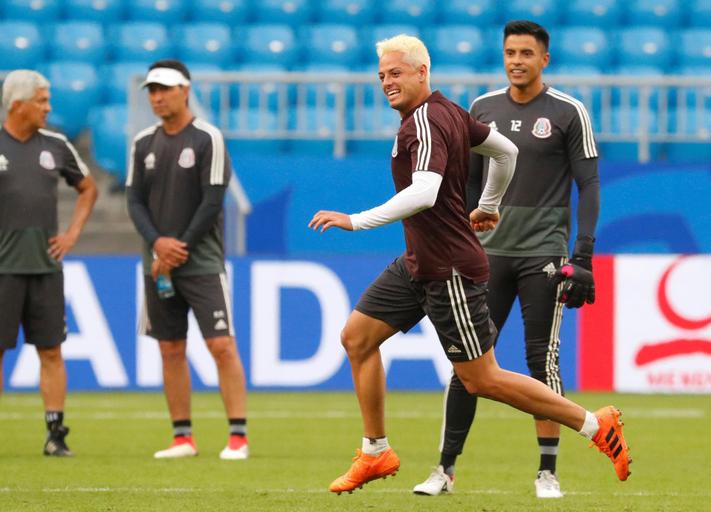 Whilst for Mexico, they are looking to break the curse of the fifth game when they take on Brazil. Los Tri has made it to the round of sixteen for their seventh consecutive World Cup and fallen at this stage six times previously they will be targeting to break this curse in Samara.

Mexico has South Korea to thank for assuring their place in the round of sixteen. After losing 3-0 to Sweden in their final group game, the South Koreans stunned Germany 2-0 that result assured Los Tri’s knockout stage progression. Queue the viral video of the South Korean ambassador to Mexico celebrating with fans in Mexico City.

In team news, centre back Hector Moreno is suspended so expect Carlos Salcedo to slot in at the back. Juan Carlos Osorio will have lifted the confidence of the side following their humbling against Sweden and will be hoping his charges can replicate the form of their opening game against Germany in which they won 1-0. Mexico jostled and pressed the 2014 champions throughout, and this all-action style springing on the break could be the key to get the better of the Seleção who will press high up the pitch when on the attack.

Javier Hernández aka Chicharito has bleached his hair blonde and will be hoping to add to his already record-breaking tally for Mexico. Chances could be few and far between for El Tri, and the West Ham striker will have to be at his very best if Mexico is to get the better of Brazil for the first time ever at a World Cup.

It promises to be a fascinating encounter as Brazil and Mexico face off for a place in the quarterfinals.  Watch the Live & Exclusive stream of the game on MAX HD3 & beIN SPORTS CONNECT. 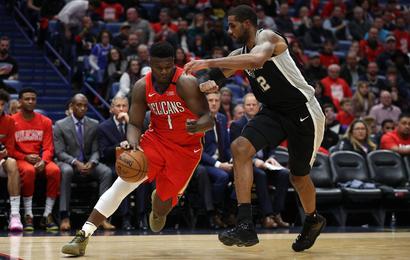