The 43-year-old returned to Juve in 2019 following a season away at Paris Saint-Germain and has been second choice to Wojciech Szczesny since.

Buffon's announcement on Tuesday arguably did not come as a surprise; however, the fact he is still contemplating playing on may have raised some eyebrows.

If he does continue his playing career, whoever his next employers are will certainly be able to count on plenty of experience and knowhow.

Buffon is one of the sport's few stars who have played top-level football into their fifth decade.

Here are seven other legends who set an example for Buffon to follow with their remarkably long careers in the game.

The ultimate one-club man, Ryan Giggs stayed at Manchester United for the entirety of his glittering career. He managed to slowly transform himself from a rapid, tricky winger into a cultured central midfielder in the latter years of his playing days, helping to extend his time on the pitch beyond the age of 40. Giggs won an extraordinary haul of medals at Old Trafford, including 13 Premier League titles, four FA Cups and a pair of Champions League crowns. He played in 632 Premier League games, scoring 109 goals, with only Gareth Barry topping his appearance tally. Giggs worked as Louis van Gaal's assistant at United, having taken charge on an interim basis following the sacking of David Moyes, before going on to take charge of his country in 2018. He has been temporarily replaced as Wales boss after he was charged with assaulting two women last year, allegations that Giggs denies.

Paolo Maldini was still going strong for Milan beyond his 40th birthday and, like Giggs, he only ever played for one club. Seven league titles and an incredible five European Cup/Champions League wins headline a litany of honours that Maldini helped marshal at San Siro, playing across their near impenetrable back four for almost 25 years. Maldini, son of another Milan legend, Cesare, is one of a select group of players who made over 1,000 appearances in all competitions during their career. Today, the former Italy man is back at Milan, acting as their technical director.

Kazuyoshi Miura is still playing, at the age of 54. That the Japanese striker made his debut almost 10 years before Buffon begins to tell part of his incredible tale. Known as King Kazu, Miura plays for Yokohama FC in Japan's top flight, becoming the club's oldest ever player at 53 in September last year. The oldest player and goalscorer in the history of global professional football, Miura is regarded as one of the finest Asian players never to have featured at a World Cup, although he made 89 appearances for his country.

Before Miura snatched them off him, Stanley Matthews held the records for being both the oldest professional footballer and the oldest goalscorer in the game. Matthews - the Wizard of Dribble - made nearly 700 league appearances for Stoke City and Blackpool in a career that spanned three decades. The 1953 FA Cup final is regarded as the Matthews Final, even though Blackpool's Stan Mortensen scored a hat-trick. Matthews won the first European Footballer of the Year award, while he was officially capped for England 54 times, although he also played a host of unofficial wartime games for his country.

Best known for his spell at Barcelona in club football, Brazil great Rivaldo was still playing beyond his 40th birthday, albeit only briefly. Rivaldo came out of retirement to sign for Mogi Mirim, the club where his son Rivaldinho was also on the books. Rivaldo picked up two LaLiga titles at Barcelona before continuing his European adventure with Milan, winning the 2002–03 Champions League with the Rossoneri. But it is as a Brazil international that Rivaldo is best remembered, having been a key part of the side that won the World Cup in 2002.

Weghorst delighted to get off the mark for United 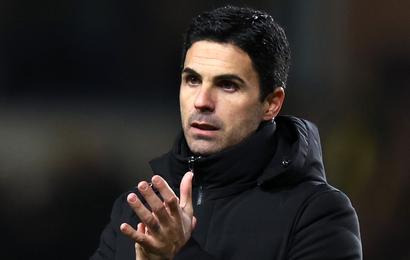