Star striker Rashford started from the bench just four days before a crunch Premier League clash with leader Liverpool, but he was introduced as a substitute three minutes before Juan Mata scored the only goal on Thursday (AEDT).

The England international appeared to be nursing his back and, after initially attempting to play on, had to be replaced with 10 minutes remaining.

The issue provided a disappointing end for Ole Gunnar Solskjaer, whose side came through a replay after drawing the first clash 0-0 earlier this month against the opponent that knocked them out of the cup last year.

A lively opening saw John Ruddy crucially bat the ball to safety as Daniel James bore down on goal following Mata's gorgeous lofted pass, before Raul Jimenez twisted into space in the United area but shot straight at Sergio Romero.

United were fortunate to see a Wolves goal ruled out in the 10th minute, as Fred hopelessly hacked a clearance into the legs of Nemanja Matic, allowing Jimenez to challenge Harry Maguire and inadvertently control with his arm before Pedro Neto slid the ball into the net.

Ruddy saved low from Mata and blocked bravely from James either side of Matt Doherty heading against the base of the left-hand post after a short Wolves corner in an even first half.

James drilled across the face of goal early following the restart, but second-half chances were sporadic until the decisive goal.

United responded to their counter-attacking opponents with a break of their own, Anthony Martial timing his pass well to keep Mata onside and he produced a delicate dink over Ruddy.

However, then came the Rashford blow, the forward going down following a challenge with Doherty and never regaining full fitness, hobbling off for Jesse Lingard to provide Solskjaer with concern before the Liverpool clash. 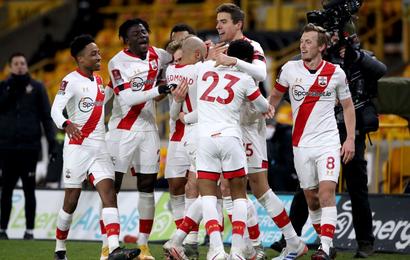