France marked its qualification for EURO 2020 with a 2-1 victory as Olivier Giroud's penalty ended Moldova’s resistance at Stade de France.

Turkey's draw with Iceland earlier on Thursday had lifted any pressure off France, guaranteeing their place at next year's tournament, and Didier Deschamps' side put in a rather underwhelming display in Paris.

With no requirement to win, France made a sloppy start - calamitous Clement Lenglet defending handing Vadim Rata a chance to put Moldova ahead.

Alexei Koselev's error gifted Raphael Varane an equaliser, though, and France moved top of Group H when Giroud sent Moldova's goalkeeper the wrong way after Lucas Digne had been scythed down.

Against the run of play, Moldova hit the front in the ninth minute as Lenglet twice failed to clear with attempted headers - Rata nipping in to steer the visitor into an unlikely lead.

Benjamin Pavard went close to an immediate equaliser with a dipping half-volley, while Giroud should have done better from Digne's cross.

Giroud did play a part in France's leveller 10 minutes before the break, standing his ground as Koselev - who wanted a free-kick - let the ball slip from his grasp, allowing Varane on hand to head home.

Kylian Mbappe seemed set to make it 2-1 early in the second half, only for his goal-bound strike to be blocked by a Moldova defender, before Giroud volleyed over from close range.

For all their domination, France's efforts looked likely to prove fruitless, until Veaceslav Posmac's reckless lunge on Digne.

Giroud made no mistake, slamming in his third goal in as many appearances to complete the comeback with 11 minutes remaining. 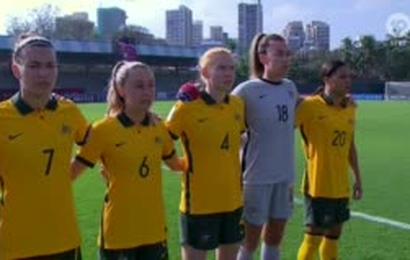